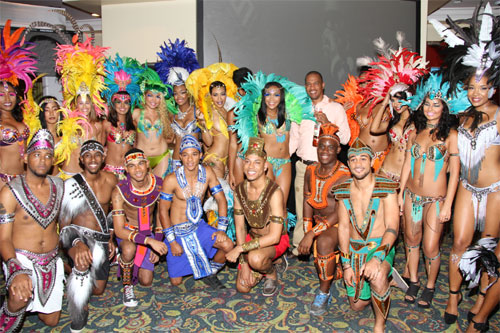 King Alarm has partnered with Bacchanal Jamaica to introduce the latest in tracking technology, “KingTracker” to the Road Parade. Persons anywhere will be able to track the live movements of the Road Parade as it moves through Kingston on Sunday, April 27 using the latest Tracking technology available, courtesy of King Alarm. Tracking can be done using any PC or smartphone once that device has access to the internet.  On logging on you will be able to see the location of both the front and back of the road parade along with the direction and speed that that the parade is moving in. Position alerts will be seen live in real time and not in a delayed format.

King Alarm's Managing Director, John P. Azar, said his company was pleased to partner with Bacchanal Jamaica in this latest venture: "We have sponsored Bacchanal since our inception 14 years ago and I know that Michael and his team are always working to provide only the best experience for their patrons. Whether it be a masquerader who is late in joining the parade, or a member of the public who is desirous of coming out to watch the bands, our King Tracker technology will certainly simplify their experience. I am proud to say that this latest offering is one that masqueraders even in Trinidad have been hoping to have for many years and we are proud to be offering same in association with Bacchanal Jamaica."

Charmaine Franklin of Bacchanal is also elated at this innovation, “Bacchanal prides itself on keeping up with the times and our young audience who are extremely tech savvy. Our promotions are very heavily internet based and so this is a very natural addition.  Persons who are playing mas as well as those who would like to watch it often need to find out where the band is at a particular time. Before this was difficult to determine, but now the answer is at your fingertips. We are really happy that King Alarm has been able to give us this technology. Using a play on words, Mrs. Franklin also remarked, “Remember this year we are going to have a spectacular King Costume leading the parade and if you wish to find out where he is all you need to do is to use KingTracker.”

Persons wishing to use this cutting edge service should log on to www.landairsea.com. Username is KingTracker and the password is Roadmarch.  For more information contact the Bacchanal KingTracker Hotlines at 594-1689 (Digicel) and 422-7756 (Digicel).

Bacchanal Road Parade takes place on Sunday April 27th starting at 10:00 am. Everyone is invited to come out and watch as the carnival season comes to a climax.  Sixteen spectacular costumes will be on create a kaleidoscope of colour, led by the towering King and Queen costumes as they make their way from the Mona High School through the city streets and ending at the Mas Camp.

This article is part 11 of a 14 part series. Other articles in this series are shown below: