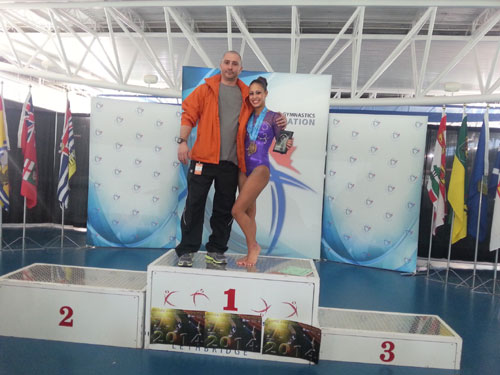 Photo: The champion of the Alberta meet, Marisa Dick on the podium with coach Ovidiu Serban.

2013 SOSA Female Athlete of the Year Marisa Dick was recently crowned the champion gymnast in the Canadian province of Alberta. 16 year old Marisa participated in the Artistic Gymnastics Provincials, the premier annual competition for male and female gymnasts in the province. Over 500 athletes, 100 coaches and 50 officials made up the marquee event held at the University of Lethbridge’s Centre for Sports and Wellness.

Marisa’s position and scores on each of the four apparatus were as follows:

Marisa’s champion placement means she will be among a team of 7 women to represent Alberta at the Canadian National Championships. According to coach Ovidiu Serban ‘everyone is impressed with how good Marisa is and the support is amazing”. Given her 50th place finish at the World Gymnastics Championships in 2013, there is every chance Marisa may be the first Trinidad and Tobago national to represent at the Commonwealth Games in the sport. This country’s National Invitational Championships will be held from 6-8 June 2014.