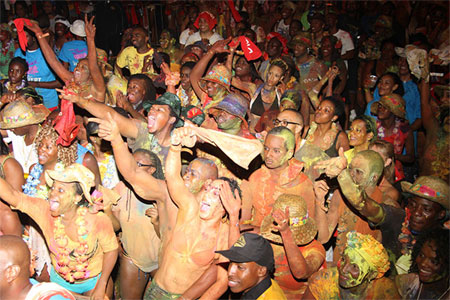 Following the success of the Mas Camp Friday night series, Bacchanal will host its annual beach fete, this Saturday, April 19.  Beach Jouvert, which is held in association with major sponsor, Smirnoff will take place at the renowned James Bond Beach in Oracabessa, St. Mary. The fete, which hosts thousands each year, is well known for its use of colouful paint to morph unsuspecting patrons into unrecognizable revellers.

While the all day, drink inclusive event will have an abundance of alcohol options, team Bacchanal firmly asserts the importance of drinking and feting cautiously. “While each year our objective is to offer an exceptional party experience to our supporters, it is it is equally if not more important to us that they do so responsibly”, emphasized Bacchanal Director, Charmaine Franklin. Bacchanal Jamaica’s partner for the event, Smirnoff, is also a major advocate for the moderate consumption of their popular vodka brand. In fact, as part of their mandate, Smirnoff will assemble a Soup and Detox Bar at this Saturday’s party.

Patrons who each year, look forward to their straw hat and colourful lei keepsakes will also delight in the bonus amenities divulged by Smirnoff Brand Manager, Jermaine Bibbons. According to Bibbons, Beach Jouvert goers can also anticipate an obstacle course, complete with a massive water slide, a dunking zone and the added option of syrup.

Amidst the paint fun, James Bond Beach will come alive with performances by the dynamic Trinidadian couple, Bunji Garlin and Fay-Ann Lyons. Bunji who led the 2013 season with his “Ready fi di Road” hit has repeated last year’s success with the tracks “Tabanca”, “Truck on di Road” and “Red Light District”. Fellow soca star and wife, Lyons who is a three time Trinidad Carnival Road March Champion is also expected to thrill audiences. Both will perform alongside the Asylum Vikings Band. Beach Jouvert will also host a slew of selectors at the helm of the turn tables, including deejays Nuphoric, Bambino, Richie RAS, Smoke, Lee and Sparkles Productions.

Bacchanal Beach Jouvert is sponsored by Smirnoff, Digicel, KFC, Pepsi, TVJ, Fame 95FM, Ammar’s, RJR 94FM. RE TV, The Jamaica Observer, Pure Country, Sparkles Productions and Happy Ice. Patrons must be 18 years or older to attend. Weapons are not permitted at the event.

Soca fans can keep abreast of all the Bacchanal fun by visiting www.bacchanaljamaica.com or through the event’s Facebook page at BacchanalJamaica as well as Instagram and Twitter @Bacchanalja.

This article is part 12 of a 14 part series. Other articles in this series are shown below: