Kallicharan's 404no earns comparisons to Lara 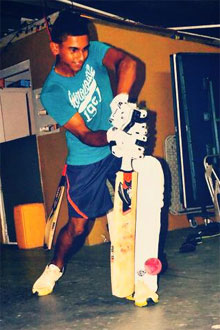 Secondary school cricket may have found its own Brian Lara. National U15 captain Kristan Kallicharan scored an unbeaten 404 not out on Monday to lead Vishnu Boys to a massive victory over Valencia. The youngster undoubtedly earned comparisons to the West Indies legend as he led his team to a score of 548/1 in 35 overs in the Powergen Secondary School Cricket League quarterfinal. Kallicharan’s long knock included 44 fours and 31 sixes.

Offering congratulations to the right-handed batsman, the Honourable Anil Roberts, Minister of Sport said, “It not only takes skill and physical strength to deliver such an amazing performance but clearly this young “phenom” has a level of mental discipline that belies his age.

“The innings reminds me so much of the drive and discipline Brian Lara exhibited while he was at Fatima. I witnessed that first hand as a student and now as Minister, I see Kallicharan clearly signalling that he too, has the potential to become one of the sport’s greatest batsmen. I extend my heartfelt congratulations to young Kristan, his parents, coaches and his school.”

Vishnu Boys was the recipient of the 2012 Spirit of Sport Award (SOSA) for Best Performing School not only for their sporting prowess but also for the institution’s academic achievements and the strength of character they instil in the young men who attend the college.

The Sports Company and the Ministry of Sport also extend congratulations to Kristan on establishing a new record in the SSCL. We’re anxious to see his continued progress and contributions to the gentlemen’s game for school and country.