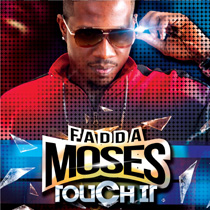 Port-of-Spain, Trinidad. May, 22 2014 -- On the heels of the release of his brand new single, ‘Touch It’, written and sung with the ladies in mind, Devon Moses, known best as Fadda Moses is a bit bothered by news that eight teenage girls of a secondary school in South, Trinidad are said to be pregnant.

The artiste who continues to show a high level of consistency, earning favor among fans locally and abroad, says this just shouldn’t be; and understanding of the fact that his lyrics often call on the females to obey instructions of gyrating and dancing, he says women need not be distasteful with their behaviour. “I don’t think a woman has to wear the shortest pants to look attractive or to be sexy. A woman doesn’t have to split to the ground or show off her body to dance and enjoy herself at a party,” he said, adding that it all comes down to respecting oneself.

Moses’ recent release, which was produced by Millbeatz Entertainment, David Millien, has caught on across the urban radio market. It was almost an instant success. He says he’s thankful for the interest taken by many, to the music he’s been releasing since announcing his decision almost two years ago, to be managed by Damien Nesbit. Damien meanwhile says there’s a lot in the making for Moses, and interest is growing not just locally, but overseas. “An African production team is eager to get some work done with him and he also has some big collaborations coming with some reputed Jamaican artistes,” said Nesbit.

But amid all of this, Moses remains disheartened by much of what is happening in Trinidad and Tobago. He says parents must step up to the plate and act their respective roles. As a father himself, the young entertainer holds that particular role near to his heart. He says he tries to accommodate every school tour he’s invited to annually, just to deliver words of encouragement to the students. “It’s a good forum, not just for me to promote my music, but for me and other artistes to touch the hearts of the youths. I take that responsibility very seriously,” he said.

With a steady head when it comes to his career, Moses is moving apace to make the required impression. He’s been using digital tools to promote himself, having used online music portal, Sound Cloud to release ‘Touch It’ first, earlier this month. The song was subsequently sent to radio stations and has since been receiving pretty good rotation across the board. Separately, there are plans to release yet another single in the weeks ahead and the artiste has also been working on getting his soca music for 2015, organized so that his releases will be delivered to the public, earlier. “I want to make sure the music is out there earlier this coming season. I’d also like to do some when it comes to production with, Kerwin Du Bois and Nebula 868,” he revealed.

Moses is making good of his God given talent. His unique style and ability to write his own music, makes him truly one of a kind in Trinidad and Tobago. He says he will continue to give music lovers that feel good musical vibe, adding that he hopes women will see his style and others of similar quality for just what it is, feel good music. “Ladies, hold up your heads. Don’t allow lyrics of songs to dictate how you behave,” he said.