Magnum Kings And Queens: A Clean Take On Dancehall 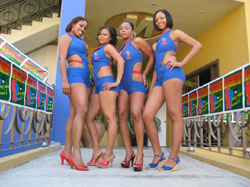 Sunday January 11- Kingston Jamaica:-  Dancehall music is the heartbeat of the Jamaican people and has captured the affection of fans worldwide and Magnum Kings and Queens of Dancehall has tapped into this pulse by bringing quality and clean entertainment to the masses.

Executive Producer, Mark Kenny, notes that Magnum Kings and Queens of Dancehall is about promoting clean music: "Dancehall Music can be highly creative without promoting violence or being offensive." Kenny makes the point that one can still have the fun and gain resonance in the industry without having violence and lewd content in their music.

Dancehall artiste and series assistant producer Sanjay, points out: "Your lyrics have to be clean to play on the radio. Media houses have to adhere to Broadcast Commission's obligations and artistes must pay attention to that."

Sticking to such policies, Magnum Kings and Queens of Dancehall has in place a guiding principle of clean lyrics.   Sanjay explains further: "Based on the way the competition is set, you must have clean lyrics...another thing to take into consideration is that most dancehall shows are financed by sponsors who have an image to maintain."

From time to time you will come up on a few songs that are not in keeping with our policy and may need to be amended. What we do is help in the editing and rewriting of it.  You have to be careful in the industry and especially as a new artiste you don't want to step on a landmine. With so many bad perceptions of the music out there why would you want to contribute to the negative?"

Dancehall has a long tradition of clean lyrics, from the likes of Assassin to newcomers such as Konshens. For dancehall to appeal to the greatest number of fans of all ages and walks of life it has to be palatable. This is the reason the producers of the competition have taken this strong stance.

The producers of Magnum Kings and Queens of Dancehall see the competition as a vehicle for the promotion of clean dancehall both locally and internationally. Natalie Parboosingh, producer for the dancehall show underscored: "We feel that Dancehall can have a positive and exciting impact on listeners and the artistes without including bad words or derogative language. Of course we cannot water down dancehall too much as it would lose its authenticity but on this show we ensure that we control the exposure level of the potentially controversial language.

Further substantiating her point, Parboosingh recalled the overwhelmingly positive reactions to the show from the general public and the contestants in the first season last year. "We have found with last season and this season's auditions that contestants comply and react positively about projecting clean lyrics. They also often create lyrics about stopping violence and encouraging safe sex which sends a great message."