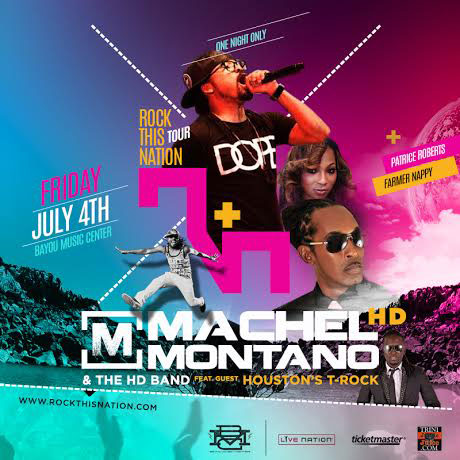 HOUSTON, TX (May 29th, 2014). Machel Montano HD, the front man of the immensely popular Soca band Machel Montano and The HD Band (MMHD) noted for his high energy, fastpaced, unpredictable on-stage performances and consistent “sold out” concerts is all set for showdown with thousands of adoring fans when he touches down in the Lone Star state with his full band in tow for the “Rock This Nation” Tour. Tickets go on sale on Friday May 30th on ticketmaster.com, LiveNation.com and at the Venue Box Office. Limited discounted early bird tickets can be bought with a promo code, accessible ONLY by liking the “ROCKTHISNATION” facebook page.

The occasion would have historical undertones as it marks Montano’s first ever full band performance in Houston on the holiday of July 4th. More interestingly, the event is scheduled to take place at one of Houston’s premier concert venues; The Bayou Music Center, a venue usually reserved for top charting pop artistes the likes of Lorde, Rage Against The Machine, Nicki Minaj, Mariah Carey, Nas, Coldplay, Nickelback, Bruno Mars, Kelly Clarkson, FUN, Deadmau5, Elton John, Kylie Minogue, Alicia Keys and Sting to name a few.

After this year’s historic Mega 35,000 “Sold Out” Concert, “MACHEL MONDAY” in Port of Spain Trinidad (which saw performances by Legendary R&B Group Boyz II Men, Timaya of Nigeria, Bollywood sensation Mahalakshmi Iyer and MAJOR LAZER) the Live Nation owned 3,400 capacity venue is fully equipped to handle the energy and amplitude that will be transmitted by the fans and “The King of Soca” on Friday July 4th (Independence Day).

“Houston’s potential to be the next mecca of all things Caribbean and beyond in the US is resounding and it is only fitting that this stellar performing artiste (MMHD) be a fundamental part of the evolution,” says Mrs. Elizabeth Montano, Manager at XTATIK Ltd.

Drew Dixon, GM at Live Nation further explained; “Houston is home to a diverse demographic, namely alot of West Indians, but for whatever reason they aren’t able to see great, memorable performances by their Caribbean artistes. Our mission, together with the “ROCK THIS NATION TOUR” is to be part of this exciting journey in bringing quality artistes to Houston and what better way to do so than to bring the number one Soca act in the world to set the bar.”

MMHD closed of the 2014 Carnival Season by winning the top two (2) titles “Soca Monarch” and the “Road March” title. (Most Popular Song during the festivities).

The concert carded on Friday July 4th, 2014 at the Bayou Music Center would not only be the first for this act, but also in the genre of Soca and would be another historic step in taking Soca music globally.