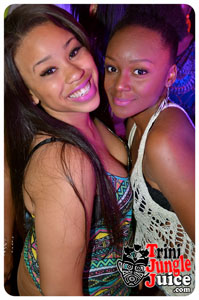 It’s Carnival time again in the ATL and we’re checking out Demolition Crew’s Tenth Annual Cooler Fete, an obvious carnival staple for many in the ATL and surroundings. It was my first time hitting this session, so I was very curious to see how it compared to other cooler fetes, both in the US and in Trinidad.  The event was held at the spacious Jolie Event Center in Decatur, GA. This place was just the right size for the 2000+ crowd. It may not be fit for kings and queens, but it was sure fit for feters and winers! With the promoters, the venue, the DJ’s and the TJJ Team all on the inside.... everything else was just gravy!

The TJJ Team... Oriental Juice, Joy Juice and I, Sigma Juice... arrived around the 12:30 mark where parking was plentiful and not too painful.  That’s always a good start to any good lime. Entry was handled quite professionally at the door. Like dey was expecting us :-). Needless to say as we entered, the BRAM was RAM!  Talk bout people???!!!

To follow Machel Montano’s expression “Team Up” in his 2014 hit song, E.P.I.C, everyone teamed up this year! MADD Colors, MADD FLAVA, Inferno, Scandelous Crew, T.O.C. Crew, We Kinda Ting Crew, Demolition Crew and the TJJ Team were all in full effect!! And these teams were just to name a few.

With coolers on the inside, and even a coffin and refrigerator, all we needed was to have cameras clicking?  Check and check!  The first landing spot proved not to be the best locale for acoustics. After a little scouting, we relocated closer to the front where the speakers were.  That took care of that.  The vibes was on and popping from the word go.  There was a female reggae singer that enlightened the crowd but prior to and right after that, the dance was in full swing.  From a DJ perspective, I was a bit surprised to hear a pure reggae sound in a carnival fete but the set started off with killer back to back anthems that had the crowd in the palm of the selector’s hands! 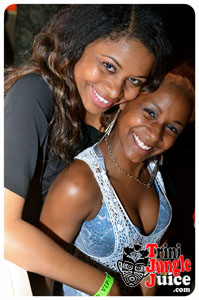 The cast that was billed for ‘Cooler Fete’, certainly helped to pique my interest.  With DJ’s Private Ryan, Back to Basics, One Drop, and a few others, there was no disappointment. A live performance from the up and coming lyricist... Lyrical, added icing to the cake for sure. He gave the folks who missed Trini this year, a little taste of what they missed, always a fete-sparker that guy. This young brother has certainly made a name for him self and seems on track to be around for a long time. Today he is a favorite among promoters.

Though there was a bit of transitioning more into a dancehall vibe, it was not all lost! This however, was the perfect set up for Back to Basics, who took the controls around the 2:30am, when the crowd was ripe for some sweet SOCA!  Despite some technical difficulties in the beginning of his performance, he had the fete exactly where it needed to be in no time flat. Can you say pace? Well if you know of Curtly Ambrose and Courtney Walsh coming down the stretch at you, then you know the pace we talking about!!! Drinks in people head and soca music jamming, was the perfect recipe to make people forget the morning had been a bit chilly.  The general himself, Private Ryan took the helm about 3:45 and did what he does best.  Mash up de place! The crowd was in a frenzy!

Where have I been the last nine years???  I HIGHLY recommend this one as a MUST GO FETE. Especially to have kicked off the ATL Carnival celebrations. It’s always the weekend before Memorial Day Carnival in ATL.  For the promoters, I would probably put another speaker bank towards the back of the fete to keep the vibes on both ends. And maybe even have the local performers do their thing much earlier in the night so the flow of the fete isn’t interfered with. Other than that, BESS FETE no doubt. Other than that, great show! I’ll definitely put this one on my fete calendar for next year!

Special thanks to the Demolition crew for having us! Much respect and we hope to be around for your twentieth!!!!! Boom!!!