Launch of Spicemas 2014 on Port Highway 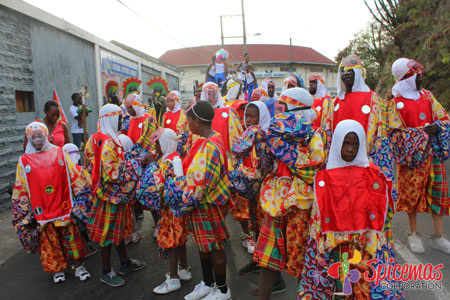 ST. GEORGE’S, GRENADA, June 2, 2014 -Thousands of carnival lovers turned out to the launch of Spicemas 2014 on the Port Highway in St. George’s. Described as the biggest launch ever, the event pulled a massive crowd from across the island. Patrons lined the entire Port Highway from the PWU building to the Post Office creating a carpet effect in the street.

The launch commenced with a children’s fun area with bouncing castles, face painting and other attractions designed for the kids. A street jump up featured Traditional and Fancy mas portrayals with Vieux Corp, Moko Jumbies, Wild Indians, Shortknee and fancy costumed mas. The Jab Jab made their usual late appearance to capture the intensity of the crowd at a time when most were concentrating on the stage activity. Making their grand appearance is often the choice of the Jab ensuring that they gain maximum uninterrupted attention.

The on stage activity started at 5pm with a short ceremony that included remarks by Director Isha Antoine-Andrew the representative on the Spicemas Corporation responsible for Calypso and Soca, Chairman of Spicemas Alister Bain and the newly appointed Minister of Culture Sen. Brenda Hood.

The Minster for Culture & Heritage Sen. Brenda hood alluded to the great influx of visitors to the island at carnival and the sizable input into the economy ranging in the vicinity of over $24 million dollars. A call was therefore made to the corporate citizens to ensure that they offer their support to Spicemas as a result, regardless as to the size of their business. She also made a call to patrons to support the various aspects of Spicemas by playing Mas and attending the shows with special emphasis placed on Pan and Calypso.

Chairman Bain briefed the audience on the activities of the upcoming season and took the opportunity to reveal some of the sponsors that are already on board for this year. LIME was announced as the telecommunication provider for Spicemas and the Platinum sponsor for Soca Monarch, National Lotteries Authority the Panorama sponsor and GRENLEC one of the major sponsors for Traditional Mas Festival. Other sponsors included Rubis and Grenada Breweries.  Mr. Bain called on other businesses to come on board with Spicemas to ensure the success of Grenada’s premiere cultural event.

The theme for Spicemas was revealed by the Minister to the acceptance of the thousands present. Sen. Hood officially revealed the theme as “Uniquely Rooted in our Rich ancestral Traditions; Spicemas 2014: an Explosion of Soca & Calypso”.

Patrons were sent off with an explosion of fireworks that brought the launch to a climax, leaving the audience with high expectations as to all the excitement for Spicemas 2014.

Spicemas Corporation thanks the Royal Grenada Police Force and the general public for their support and involvement in making the launch the success it was.