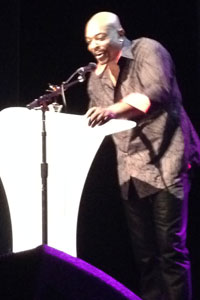 Anslem Douglas, songwriter of the internationally-acclaimed and Grammy Award-winning hit “Who Let The Dogs Out?,” has won the Black Canadian Award over five other nominees AMMOYE, JAHSMIN DALEY, SHALLI, SOCA EMPEROR and MS PAIGE for Best Caribbean Style Artist.

The awards, which took place in front of a full crowd at the Queen Elizabeth theatre this past Saturday, June 7, is the first of its kind in Canada and was jam-packed with the highest quality of entertainment. Not just a music awards show, the program included many honorees from all walks of life in the Black community in Canada, including fashion and business.

Anslem performed his 2000 massive internationally-acclaimed hit and Grammy Award-winning single “Who Let The Dogs Out?” made famous by the Baha Men, but was written and recorded two years before, in the very exciting and traditional soca style by the Trinidadian-born and now Toronto-based singer-songwriter. It was originally, affectionately called “Doggie” and here is the link http://www.youtube.com/watch?v=O27fagObxaM to that first recording, which was a huge hit in the Caribbean initially. The covered version was a chart success in many countries, and also became a popular song at U.S. sporting events and was featured in the 2009 hit comedy The Hangover.

Anslem has a new album out called Project A.D. released in the spring of 2012, and it has been on heavy rotation in the U.S. and offers much more than just the traditional style soca.

This hip, upbeat album winds its way around energetic dance mix riffs and mellow grooves. The unique, husky yet sultry sound of Anslem’s vocals fit like a glove, especially on some of his more sizzling x-rated tunes like “The Sex You Give To Me,” I Ain’t Gettin’ None,” and the funkadelic and very danceable “Slap-It.” Arrangements and production is slick yet raw at the same time as evidenced in the beat-driven, house-styled tracks “Love Making” and “Forever” (where his voice sounds very reminiscent of early Seal recordings). The more psychedelic-inspired “Tony Needs a Daddy” and the soul-baring “Mrs. Brady” shows off the softer melody and lyrics from Anslem’s arsenal.

Anslem’s other contributions for 2013 include the single, “Do You Think He Will Understand”, a power Soca called "Bacchanal", a neo-Calypso single, "Dancing With You", and a piece written specifically for women "When You Wine." Project A.D. and the singles are all now available on iTunes and CD Baby.

The Black Canadian Awards ceremony is an event that reflects a commitment to showcasing and celebrating achievements of Black Canadian professionals, artists, trailblazers and leaders within the community.