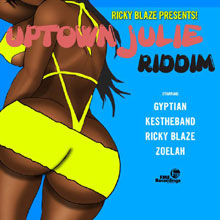 MPR Consulting - As summer is rapidly approaching upon us, we eagerly await the days of music blaring from car stereos, barbecues, beach days and dancing the night away to our favorite music.

Billboard producer Ricky Blaze has taken care of our musical selection by releasing the sizzling summer sounds of "Uptown Julie Riddim". The riddim made its debut last month on popular magazine The Fader premiered it to rave reviews. It was described by music journalist Deidre Dyer as "a sunshine-soaked riddim that doesn’t require more than an easy two-step or, if you’ve got an able partner, a good slow wine."

Responsible for Gyptian's gold-selling anthem "Hold You", Ricky teamed up once again with international reggae star Gyptian for "Stunta", while one of the Caribbean's most popular and sought after bands Kes The Band delivered "Endless Summer". Ricky Blaze performed his vocals on the hit single "All I Need", and rising new sexy soca star Zoelah rounded up the riddim with "Sell Off".

When asked why the name "Uptown Julie", Ricky stated "I knew a girl from Uptown named Julie, and in the Caribbean Uptown girls love the ghetto because they appreciate the rugged lifestyle, so with this riddim it has pretty chords and melody with a under kick bass that keeps it gully, that was the train of thought behind the name "Uptown Julie".

It will be a busy and exciting season as Ricky Blaze will continue working with some of the biggest artists while finishing his EP slated to be released in the fall.