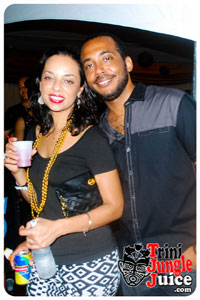 Black Rave 3.0 is without a doubt the BIGGEST and BEST soca fete thus far in St. Vincent. Racking up the largest number of attendance similar to that of the National Soca Monarch Competition. Vincy Mas 2014 is officially here.


CROWD:
The crowd was just an impenetrable mass of ravers dressed in black, moving as a collective from left to right, jumping up and down and even rotating in a wide circle to the music emanating from the HUGE speakers surrounding the stage. From afar, they looked like a massive tribe, ready for war. The patrons of the show definitely partied like there was no tomorrow.

Spotted in the VIP section for a bit of the fun were 5 Star Akil, Lyrikal and DJ Stephen just to name a few.

VENUE/ACCESSIBILITY:
Black Rave 3.0 was held in Carnival City, Victoria Park, where most of Vincy Mas' biggest events unfold and EVERYTHING was bigger and better than the year before. The stage, lighting and sound by Dynamic Guys was just incredible! Massive speakers hung from the sky and fringed the stage while lights and beams littered the ceiling of the tent covering the stage like stars. VIP, tucked into a side of the venue, was very organize and contained just about anything a VIP would need. At the back of the VIP section in one corner was a bar, tending the various thirsts of the patrons, and in the other corner the caterers answered to hunger calls and peckish whispers. The majority of the VIP section was stretched into a dance floor which was overlooked by an elevated lounge that afforded VIP patrons comfy seating on couches in an attractive setting. Huge white tents sat over the lounge and food and bar area while white ropes ran around the entire perimeter locking in the exclusivity of VIP. 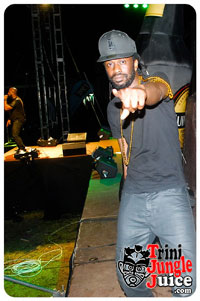 VIBE:
The excitement and energy the show provoked was very evident in the behavior of the patrons at the show. With hands, flags and lights in the air, they jumped and danced and sang all night long. The contagious vibes even had the patrons in VIP on "general" behavior. The Kinetic band was tuned and on point, the carefully deliberate line up of the cast with DJ's like TEAM ENERGY OVERLOAD, DJ STUMP-I, DJ CHEMICAL X, DJ 2KOOL KRIS, DJ TARRUS all from ST.Vincent along with DJ STEPHEN (from Trinidad and Tobago). Along with a line up of performances that you had no time to rest like BUNJI GARLIN and the ASYLUM BAND, 5STAR AKIL, LYRIKAL, EDWIN YEARWOOD (of KROSFYAH BAND), PROBLEM CHILD, SKINNY BANTON (the SALTFISH KING), DANIELLE VIERA, ROYALL, KEITH CURRENCY, WIZKID, MADSKULL, LUTA, FIREMAN HOOPER and MORE created the best results for the show which ended with SKINNY FABULOUS' performance of course.

FOOD & DRINK:
VIP had a variety and quality all inclusive drinks and food station.

SERVICE:
The promoters of the show worked diligently and tirelessly to create an altogether epic event and they succeeded. With a diverse and coordinated lighting system which included laser lights, bigger, louder speakers and sound system, A VIP that included all the perks and a production that was next to none. With staff improvements from last year I must say that there wasn't a long wait to get anything!

COST/VALUE:
With $150 for VIP and regular had started at $50 and ended at $60. With the improvements they made there was no way I felt like I was robbed.

Shout out to Gamal 'Skinny Fabulous' Doyle, Karen Veira and the rest of Stickman Entertainment and the teams that came together to put on such an EPIC event.

Ready to Rave again next year!