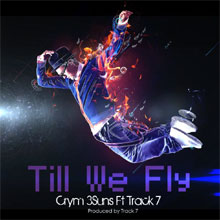 Trinidad, WI: In a bid shock music enthusiasts who are familiar with him and his style of music, former 3 Suns member Crym has released a track titled ‘Till We Fly.’ Written by Crym and produced by Track 7 for D Project Records, the Techno and R&B flavoured track promises to satisfy the palette of music lovers. Having been embraced previously mostly as a rapper and chanter, Crym understands that some persons may be surprised. “I know some will be in disbelief but others who know me will know to expect the unexpected” shared Crym when discussing the mixture of genres in ‘Till We Fly.’ Many may wonder about his inspiration, his response “Life.”

Describing the song, Crym admits that a number of situations from everyday life played a tremendous part in the song’s conceptualization and creation. He believes that every phrase has identifiable elements or phrases while it tackles the struggles that many face to achieve what they may consider “impossible.” Expressing emotions is an important aspect in music for Crym and he has done just that in ‘Till We Fly’ with the hope that “The words will inspire and the beat will encourage listeners to take the dance floor and free up.”

As far as his music is concerned Crym is not afraid to incorporate elements of hip hop, jazz, rock and any new sounds to his music which he loves. ‘Till We Fly’ marks a change in gear for Crym as he continues on his journey as a solo artiste.

Listen to the track here >> Till We Fly