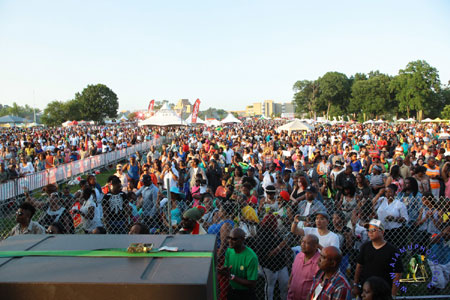 Queens, NY - Over 15,000 patrons - some coming from as far as South Florida and even Toronto, Canada - made the trek to Roy Wilkins Park in Queens, NY on Sunday, July 20th to savor the dazzling array of treats that the fourth annual Grace Jamaican Jerk Festival had to offer. New York's largest Caribbean food festival, as the name suggests, is an exposition of jerk foods, and there certainly was an abundance of everything jerk, including peanuts, potato chips, lobster, corn and fritters.

Food was definitely a major attraction as the traffic on the food stations was immediate and started as soon as the gates opened at noon. There weren't enough hands to sell corn done in various ways - roasted, boiled and jerked. Next in popularity was jerk pork followed by jerk chicken, then fried and escovitched fish. And those who wanted oxtail, curried goat, mannish water, pepper shrimp, sweet potato and cornmeal pudding could find them all there for reasonable prices. Grace Foods served samples of their various juices and coconut water and lucky patrons won prizes from corporate booths including vacation packages and airline tickets.

The pulsating beat of African drums signaled the start of the Western Union cultural stage where early attendees positioned their chairs and blankets to comfortably enjoy a variety of poetry, fashions, steel pan performances and contemporary dance moves.

The Vendor Dish Call Contest was won by Boston Jerk City Restaurant, while State Committee Woman Scherie Murray defeated NY Senator Kevin Parker in the hotly contested 'Celebrity Jerk Cook-Off'. The Chopped Throwdown winner was Chef Max Hardy who won over Chef Gason Nelson both former contestants on the Food Network's Chopped. They had to prepare a dish from the surprise basket which included whole Brazion (fish) with Asian ingredients and Jerk seasoning. 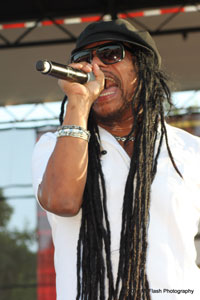 As much as Jamaicans love their food, they equally adore reggae music. For some, the attraction to the jerk festival was to enjoy the live performances by Mr. Vegas, Jamaican songbird Etana and UK-based hit machine Maxi Priest. All three ‘A-listers rocked the crowd with their impressive catalogue of hits. The crowd sang along in the perfect Sunday evening summer weather.  Music lovers got an extra treat with the addition of a ‘pop-up’ exhibition of reggae memorabilia, original art and graphics by designer Michael Thompson in celebration of VP Records’ 35th anniversary. The company relocated from Kingston, Jamaica to Jamaica, New York in 1979 and established a retail store that is recognized today as the global leader in the field. The display featured graphics on tent panels with music, books and other memorabilia and a seven minute video chronicling highlights in the history reggae music and the careers of founders Vincent and Patricia Chin.

The kids also had a blast with an expanded Kidz Zone that offered more rides, more games and more fun for all ages. Art and craft vendors were abundant selling a variety of merchandises. There were a few unusual stations such as the Kingston College Old Boys Association boutique in the park selling KC's purple products; Team Jamaica Bickle raising funds for the Reggae Girlz football program as the team seeks to qualify for next year's World Cup in Canada and Farm Up Jamaica promoting its farming mission with St. Elizabeth red mud stained water boots and t-shirts for sale.

"This year's festival delivered an enjoyable experience to patrons and I would like to thank all those who helped to make it a resounding success", festival co-founder Eddy Edwards declared at the end of the evening. "We look forward to next year as we continue to build this festival in New York", he continued.