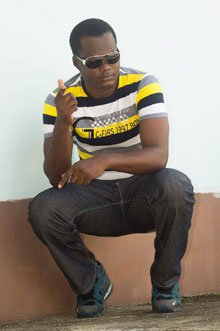 Port-of-Spain, Trinidad. September 30, 2014 -- Great things have been happening for T&T’s reggae industry and while for many, the concept of worldwide recognition for this locally adopted entertainment variation may seem far-fetched, the recent release of a 12 track Reggae album out of T&T that has made it to iTunes’ ‘New and Noteworthy’ list, is no laughing matter.

Standing proudly behind the success of this latest album release are the artiste, Matthew Greenidge and the production house that is responsible for the creation of a few of the album’s 12 singles, Jahlight Records. The album aptly entitled, “Jah Rules Over All” is doing well outside of Trinidad and Tobago with tracks like, ‘Babylon Deception,’ which features Queen Omega, ‘Never Forget My King’ featuring Solomon, ‘Your Love,’ ‘He Loves Forever’ and the title track, ‘Jah Rules Over All’ being touted among music experts overseas as must hear melodies that are complimented by deeply rooted lyrics.

The album was released by Jahlight Records out of Trinidad and Tobago, however several of the singles were produced by international producers, among them, Flow Production out of Switzerland, One Harmony Records, out of the United Kingdom and Elementree Productions out of the United States. Also aiding locally was Studio 53- a prominent name on the Trinidad and Tobago music circuit, having been responsible for the production of several well-known reggae tracks.

Matthew Greenidge is enjoying every minute of his music’s journey. Already, the album has been positively reviewed by veteran music journalist, Alex Henderson – a writer whose words have been featured in Billboard Magazine, The L.A. Weekly and a lengthy list of notable publications. The Jamaica Star has also delivered a positive review of the album to its readers, allowing its audience to gather an initial overview of what’s to come as videos for the singles are unleashed one by one. Already, Greenidge and his team have released a video for the album’s first single, ‘He Loves Forever’- a video produced by Kingdom House Concepts. A second video is now in the works for the title track, ‘Jah Rules Over All.’

The album, Greenidge’s debut of such, has been so well received that producers across the world have been requesting his vocal input on their productions. Currently, he’s working on music with the UK’s Dukie Dread’s Step Faarward Music, and recently, Greenidge voiced singles with Canada’s Jah Servant Records. Those two songs have been titled, ‘Jah Is The Father’ and ‘Spiritual War’. His journey continues and no matter the challenge, Greenidge is ready, putting his God first as he makes his way to the mainstream gospel market, prepared to infect the conscious and those less inclined with the greatness of God’s love, through music.

Matthew Greenidge has been recording reggae music since 2011, having started his career under the guidance of producers at Pengco Music and Studio 53 in Trinidad and Tobago.

In 2012, he began his musical journey with T&T’s Jahlight Records, a well- respected production house, known for its involvement in the gospel and reggae music industries. Together with Jahlight Records, Greenidge has recorded several singles, among them, ‘Bob Marley’, ‘Burn To Learn’ and ‘Hail The King.’ He subsequently began working on his debut album- ‘Jah Rules Over All.’ Matthew Greenidge is highly influenced by musical greats such as Bob Marley, Glen Washington, Gregory Isaac and a less notable but highly respected elder cousin, Rincher.