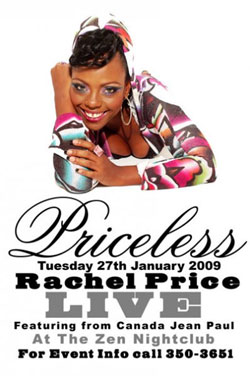 Rachel Price, the Queen of Caribbean Comedy continues to rule with her original blend of improv, political and social commentary rolled up with some good old Trini picong. Rachel had a successful series of shows at 510  last year and is now ready for the New Year – she takes her stage show on the regional and international circuit – and  launches with a bang at home in Zen Nightclub, this Tuesday 27th January 2009.

Featuring new material, the show at Zen nightclub kicks off Rachel's series of international concerts dubbed "PRICELESS" ... The first show will open with Jean Paul - a Trinidadian born Canadian. He has been featured on Def Comedy Jam and has written for some of the funniest comedians and sitcoms in the USA and Canada. And Rachel promises some musical surprises. She wowed audiences last year at one of her performance where she played classical music on a nearby piano.

The show is already proving to be a success for Priceless Entertainment: the buzz has sent patrons in a tizzy for tickets. All seats are sold out with only general tickets available. Good news for an artiste in the hectic Carnival season.

The PRICELESS 2009 Tour then continues as Pricey heads to: