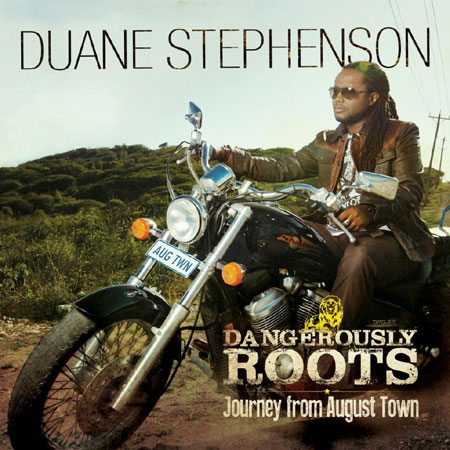 Tuesday October 14th, 2014 – ​Kingston, Jamaica and New York, NY -- Duane Stephenson’s newest album, Dangerously Roots, has only been available for 3 weeks, and has already built solid momentum placing the artist on numerous charts around the world, and has organizers organizing his promotional Dangerously Roots tour.

Officially released on September 23rd, 2014, the album received critical acclaim from fans, as well as members of the Reggae fraternity who agree that that Dangerously Roots is a solid third album from the artist.  The 16 track disk has received several accolades, among them being an entry level chart placement of 6th on the Billboard Reggae chart which quickly moved to 4th when the album became available on iTunes.  On the iTunes reggae chart, the album is #44, and in Italy, “Cool Runnings” is #6 on the charts while the album is #1 on the countries Reggae charts as compiled by Radio Popolare (Italy’s largest radio station), and his singles.  “Cool Runnings” and “Good Good Love” are the most added singles to playlists in the UK and Canada which caused Gussy, one half of Silver Star Sound who plays on Bang FM in the UK, X FM in Uganda and Times FM in Tanzania to say “I’ve always rated Duane’s music and this new album justifies that; quality Reggae from a quality Reggae artist.  I am generally not a fan of  cover versions but when they are done to the standard that “Cool Runnings” was, then it gets the thumbs up from me and from fans!”

In promoting the album, Duane traveled to Miami, where he met with fans at the VP Records Retail store in Miramar, and traveled to New York where he got ‘sirius’ with Pat McKat at Sirius XM Radio, shared some Irie vibes with radio presenters at Irie Jam Radio, met with executives at Spotify, North America’s #1 stream on demand music portal, as well as took in the sights and sounds of the cities infamous Times Square!

Of his album Duane says, “I am really blessed to be able to make music with some of the best producers in the industry which is then consumed by the best fans.  Dangerously Roots is intended to give the world music to make them pause and think about life and how we are living it.  I also pay homage to foundation artist Bunny Wailer by doing a cover of “Cool Runnings.”