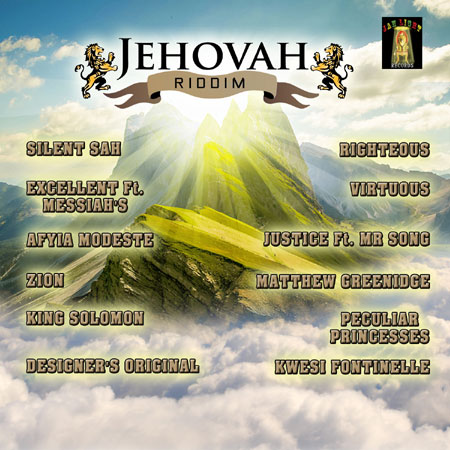 Port-of-Spain, Trinidad. October 21, 2014 --The world needs more God. That’s a sentiment being echoed by one of the Caribbean’s foremost recording houses that’s responsible for producing much of the region’s gospel and gospel-reggae hits. Jahlight Records’ head of productions, Akeunde Pemberton is not taking lightly, his mission to infect the world with the word of God through music. His latest project, the Jehovah Riddim capitalizes on the talent of several musical minds, showcasing the greatness of God and encouraging the world to follow Him.

For Akeunde and his team, creating a riddim of this caliber, comes second nature. It’s been their calling, and Pemberton says looking around the world and seeing much of the destruction currently taking place, his desire to promote God, has never been stronger. The riddim, which features 12 artistes will be released on iTunes, Amazon, Juno and others on October 28th by digital music distributor, Fox Fuse. It’s the fourth project out of Jahlight Records for the year so far- a feat the team is tremendously proud to have accomplished. “We’ve delivered three other influential items of music for the year, namely, Kwesi Fontinelle’s ‘Reconciliation’ EP, Excellent’s ‘Love Language’ and the Resurrection riddim,” said Pemberton. He noted that the Jehovah riddim is now a follow up to a riddim done in 2013, called ‘The Lamb of God Riddim.’ Pemberton makes it clear that God must be glorified, especially during this time when men have become lovers of themselves and corruption and crime has become rampant, worldwide. His projects are aimed at lifting up God’s name and reminding the world that without God, we are nothing.

Beyond the release of the riddim on October 28th, Pemberton explained that a medley video is in the works and it will likely feature the 12 artistes- each of whom have delivered powerful songs on the riddim. “We have Virtuous with a track called, ‘All I Need Is You’, Zion with ‘Don’t Worry’, Peculiar Princesses with ‘Hit Me With Your Love’, Silent Sah’s, ‘Give My Life To You’, Afiya Modeste with ‘Joy’, Designer’s Original ‘No one Sweeter’, Justice Feat Mr. Song, ‘Different Love’, Matthew Greenidge,‘He Loves Forever’, Kwesi Fontinelle’s ‘One God’, King Solomon with ‘How Long Again’, Righteous with ‘Amazing Grace’, and Excellent Feat Messiah’s ‘You’re the Reason’, he said.

Pemberton believes 2015 will be a great year for Jahlight Records- the team already having begun work on the ‘Final War’ riddim, Kwesi Fontinelle’s ‘My Hope’ album and Excellent’s ‘Spiritual Journey’ EP. He said the year ahead will also see the launch of a new gospel-reggae artiste by the name of ‘Righteous’, someone he assures is worthy of recognition.