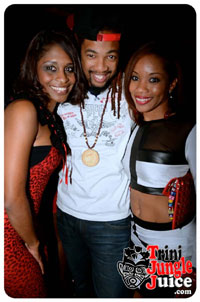 With not much happening this weekend in the DC area, and trying to keep our ear to the ground, the streets were taking about an event out there in good ole Texas. I remember the days of watching Bonanza with Lil' Joe and horse riding on the Ponderosa, so I couldn't wait to get to Texas just to say, Yeeee Haaaaaa!! Sorry to disappoint you guys, but times have changed.... obviously, and I'm sure you've figured it out by now ... our destination was FORBIDDEN! Celebrating it's 4th year, we could not miss it. "Ravish in Red" just sounded too hot!! So on Saturday November 8th, instead of everyone heading to the Ponderosa, all roads led to Club Blaunsch in Sugarland, Texas.

CROWD:
Oh this crowd was BEAUTIFUL, and dressed to match. And besides, you had to dress ravishingly (if there's such a word). The men were sharp and the women Red HOT! Sexy was the name of the game on this night! The women were very appealing and the men had no choice to look the part. T-Rock who sang "Hit and Run" last year, was also in the mix.

VENUE & ACCESSIBILITY:
The venue was very, very nice. A well laid out space made it extremely easy for patrons to get from one place to the next. From the bar, to the dance floor, to the bathroom etc., and the DJ Booth was overlooking the dance floor. Modern club furniture adorned the interior while white lounge chairs and couches were nicely positioned on the balcony. The entrance hid the true beauty of the venue, but as you turned the corner, the place was astonishing. Clean, well aerated, VIP areas, tempered and then some. The 400+ crowd fit perfectly in the venue and there was another room just waiting to be opened. I think if Divine 1 promotions ought to have Forbidden 5 next week, they will need to open that other room up! 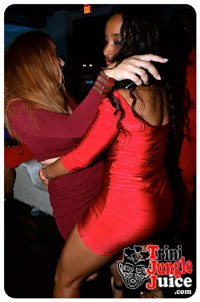 VIBE:
I need to take a breath of air here. If you came to this event with the intent on being stush, I know you left at 4am in the morning with your hands in the air, singing music to the top of your lungs... and telling the DJ, "Please play Cloud 9 by Lyrikal again! Please?" That's exactly how the party ended. No lie! Even Un-Private Ryan (ah lil' small man who just come out), say he rel enjoy himself. Dat dude was funny! From the jump, DJ Redz had the crowd spinning and the Dovy Dov came and did his thing... just priming up the crowd. Big up to Dovy for holding it down! This was just the beginning. Soon enough Dov handed the reigns over to the DJ that's been with Forbidden from year one, Back to Basics aka The Party Rocker from NY. It was all over. People probably still holding their hands in the air! Lol! From old school joints to new school styles... and then B2B buss Machel new C2k15 tune "Remedy". Oh my laawwwwd! The crowd erupted in a euphoric frenzy!! By this time, it was 1:30am and there was no stopping in sight. As a matter of fact, the promoter bargained for a 3:30am shut down, instead of a 2:30am. It seems she got the power from that forbidden body suit... and got her 3:30 closing! And once the party goers got the word that it was ending at that time, everything else was icing on the cake. The energy at this event was high. Experts say that the color red, brings out aggressiveness in people. I AGREE! All the aggressive winers came out on this night!

After about 1.5 hours on the tables, Back to Basics literally gave everything he got. But the ravishing crowd wanted more. Texas people allyuh not easy eh?! Well in Texas, you get what you ask for! If you ask for a big (bleep) Texas Steak, you will get a big (bleeping) Texas steak!! LOL. And apparently if you ask for ah another bess DJ, then you will get another bess (bleeping) DJ to play! And so the baton was passed over to surprise guest DJ Stephen outta LA.

And if I tell you the tempo never changed, please believe me! You know respect when you see it, just as you know a bess party when you see two bess DJs big up and bless up each other. And not to mention, when one DJ (Back to Basics) wheel out the other DJ (DJ Stephen) tune, not once, not twice... but three times, you know your party sweet! DJ Stephen, shut the party down with the new release by Lyrikal "Cloud 9" and had man and woman (mainly the women) climbing the ways reaching for the clouds. The vibe was so high at this point that it wasn't till 3:45am, they decided to shut us down. That song still in my head!

FOOD & DRINK:
As for the wide variety of drinks, they were reasonably priced and poured with a heavy hand. There was no food available but to the promoter's credit, they tried to get a lil' corn soup going but the vendor pulled our. His loss! Nevertheless, it was a cash bar that probably turned well that night. 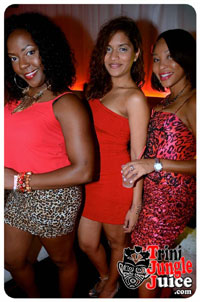 SERVICE:
The service was exceptional... everything was thumbs up. At the venue, the waitresses served bottles, the bartenders were efficient and the Forbidden staff ensured that everyone were well taken care of. Thank YOU to the Divine 1 team!

COST:
It was $20 in advanced and more by the door. Considering the venue, the all start DJ line up and TJJ's Joy Juice in the house ... it was certainly value for your money.

To wrap this up, this event was a success. Great job by Janelle and the Forbidden team. Much respect to Back to Basics and DJ Stephen for making this event what it was. Bless up the Lymerz Int. crew, T-Rock, Melissa Determined, Chris Knights, Patrick and the Houston Caribbean Festival (HCF) team, DJ Hummingbird, DJ Renee and his sound system (which was on point by the way), DJs Dovy Dov and Redz who got the thing started, and last but not least, to all the patrons who came out in full support. Thanks for making this event an exclusive one for us to cover. We are looking forward to seeing you all in 2015 for FORBIDDEN 5!