By TJJ Admin
Published on 15-Nov-14
One of T&T's Leading events producer / concert promoter, Randy Glasgow is calling on the Government to set aside some of the land at Invaders Bay, Port of Spain for the local cultural fraternity rather than give most of it  to MovieTowne owner, Derek Chin for his ... 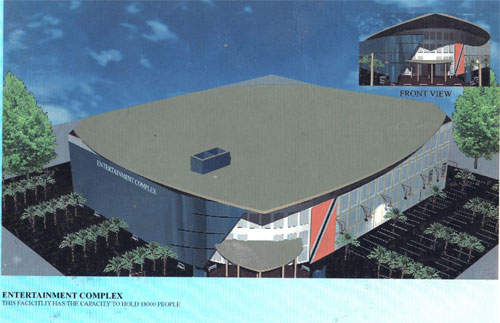 One of T&T's Leading events producer / concert promoter, Randy Glasgow is calling on the Government to set aside some of the land at Invaders Bay, Port of Spain for the local cultural fraternity rather than give most of it  to MovieTowne owner, Derek Chin for his amusement park.

Chin is planning to develop the land into what he defines as a Caribbean Epcot Centre with a series of attractions that will be known as the, “Streets of the World.” Although this will promote some measure of local culture, much of it will focus on the lifestyles, imagery and cultures of foreign lands on the 80 acres available.

Glasgow is proposing to the Government that if they were to set aside just about 19 acres of the land for the local cultural fraternity, his company  will secure the funding for the construction of a performing arts complex of 820,000 square feet (76,000m²). This Glasgow envisions will be of the grandeur of Madison Square Garden in New York and provide a space for all expressions of local culture and much more.

Glasgow in 2009 presented these plans to then Prime Minister, Patrick Manning who was very impressed with the plan and visuals shown to him. He promised Glasgow and the RGP (Randy Glasgow Productions) team to help make this vision a reality saying, “don't let your hearts be bothered. Just like afternoon comes before night, something positive will happen soon to make Trinidad the Mecca for entertainment in the Caribbean by sourcing the land.”

The General Elections followed preventing things from moving forward, but the dream is still alive. The Office of the Prime Minister, Kamla Persad-Bissessar, directed us to meet with Dr. Roodal Moonilal to further discuss the matter after speaking with advisers to the Prime Minister for several months. Dr Moonilal has said he will meet with us very soon to explore the possibilities.

The performing arts complex will be an indoor facility with seating for up to18,000 persons with easy scaling down for smaller events seating 10,000, 6,000, and 3,000. We have estimates that the construction period for this will be three years.

RGP said a covered venue in Trinidad will guarantee,rain or shine,  a flurry of annual local and international events . Among the international  events are NBA pre season games, WWE live world wide telecast wrestling, world title boxing matches,other  live pay per view, public viewing sporting and entertainment events in conjunction with HBO, ESPN,Zee TV,NBC Sports,Live Nation,Sky Sports,Fox Sports, Univision and Showtime, mega conventions and concerts. Glasgow believes that this is the time to make this a reality. He said his organization is confident something very positive will come out of their meeting with Dr. Moonilal.