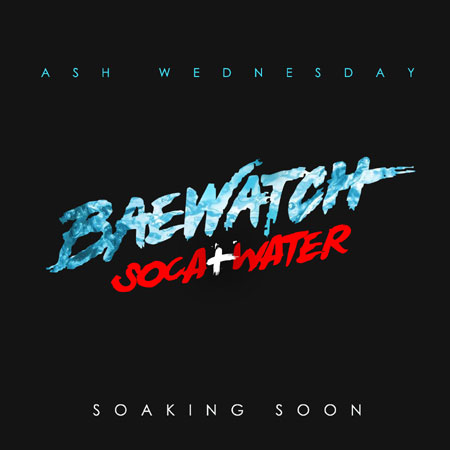 Port-of-Spain, Trinidad. November 19, 2014 -- While Ash Wednesday, 2015 may be a distant thought for many, an entertainment outfit is guaranteeing a memorable carnival cool down come February 18th next year.

Having launched ‘Baewatch- Soca + Water’ on Tuesday, November 18th, the 66 Entertainment team, steered by Rondell Roberts and Adiola Steadman, is working with a three month preparation period to provide patrons with an out of this world, post carnival experience. According to the duo, ‘Baewatch- Soca and Water’- a cooler event, will feature some of the carnival industry’s foremost entertainers, among them, Bunji Garlin, Iwer George, Lyrikal, Olatunji and Benjai.

A successful inaugural Baewatch event in October 2014, was responsible for the outfit’s decision to give the people of T&T and visitors alike, a bit more ‘Caribbean enjoyment’- post C2K15. Roberts explained that the inaugural event was one that he personally took a strong interest in, ensuring that DJs and personalities delivered music with positive messages, having personally requested that they steer clear of any negative musical connotations. Much the same will be applied to the 2015 edition of ‘Baewatch- Soca + Water’.

With décor already a topic of conversation between the 66 Entertainment Team and the folks at Rave Décor, Roberts said patrons will enjoy a full compliment of beach activities, inclusive of slides, a foam pit, inflatable toys and sprinklers. Additionally, the DJ cast promises to be a mix of top foreign and local personalities, among them Miami’s Giselle The Wassi One, Toronto’s Dr. Jay, New York’s Platinum Sounds, T&T’s Hollywood Sachy, Custodian International, Trevlyn and DingDong and boat ride sensations Akeem 5.0 and Salty.

Plans are now underway to please every patron who attends the 2015 premiere cool down event, in Trinidad. “We are going to blow everyone away. This event is aimed at bringing carnival 2015 to a close, on a very high note. We are sparing no cost when it comes to security and overall patron satisfaction, so come next year, this cool down option, will be a viable one for everyone,” said Roberts.