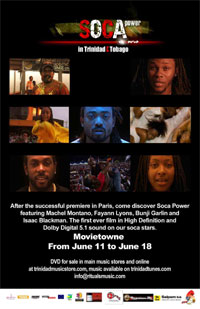 The power of soca takes centre stage in a new film set to premiere locally in June.

Soca Power in Trinidad and Tobago follows four of the genre’s most influential local talents throughout one Carnival season, moving from behind the scenes at large concerts to the heat and heart of Carnival: the streets, where mas unfolds and passions reach their paroxysm.

The film’s main characters are Machel Montano, considered the most powerful man in soca; Bunji Garlin, revered, even feared, for his biting lyrics and bold, outspoken personality; Fay-Ann Lyons, soca royalty and one of the genre’s brightest young stars; and Isaac Blackman, son of soca ‘s creator Ras Shorty I.

Through the interwoven portraits of these four stars, Soca Power is an energetic immersion into the world of soca. “From the beginning of the film to the very end, it keeps you interested, especially with the way everybody’s story unfolds,” said Blackman, one of the leading voices of Jamoo music, known as the gospel of soca. “It shows the wide diversity of our culture, and is as real as it can get in every dimension. I think it’s excellent and I’m very proud to be a part of it.” Blackman praised the film for its attempt to underscore the origins of soca and local culture. “We have a problem in T&T where we don’t archive things properly and disseminate the wealth of knowledge that exists in various sectors, from sports to entertainment. This film highlights the history of soca and T&T culture as a whole, which is very good. It adds more substance and gives an internal perspective,” he said.

Jean Michel Gibert of Maturity Music (West Indies) Limited, one of the film’s producers, agreed, saying, “The power of soca is a reflection on the Trinidadian society; the sensuality, the passions, the release, the paroxysm of our cultural celebration on one side and the spiritual, more conscious, some times even more conservative attitude. The film is an excellent illustration of this double psyche,” he explained.
Maturity Music co-produced Soca Power in T&T with ADN Production Paris and Trace TV, with the support of French National Cinema, the T&T Film Company and the European Union. Claude Santiago, who is well known for his treatment of music-related features, directed the film, which was filmed and produced using the latest audio-visual technology. It was filmed using real High Definition technology and boasts Dolby Digital 5.1 sound.

Soca Power in T&T is part of a six-part series of films called Musique Creole, which is based in the Caribbean. The music of T&T is featured alongside that of Guyana, Guadeloupe, Haiti, Martinique and Puerto Rico.

The film has already met with rave reviews. It first premiered in April at Canal+ Studio in Paris, where it was well received. It will also be released in Barbados, French Guiana, Guadeloupe, Jamaica and Martinique; and broadcast on French television and on Trace TV, which airs in Africa, Asia, and Europe.

Soca Power in T&T opens at MovieTowne on June 11.