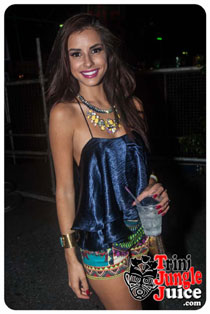 "Gyal you are the Remedy
How you wine on me
Di ting dat yuh givin me
Curin’ me so I really need your Remedy..."

But not even the most experienced doctor could resuscitate the Fantasy Block Buster when the 2am hour came as this block buster quickly became a box office flop as Machel hit the stage.  Yes this was a first for me to ever report of being disappointed with Machel or more specifically his band.  And as the 90 minute performance continued to unravel due to a symphony of errors other firsts continued to ensue.

Machel’s first song was “Like A Boss” featuring an all male dance troupe that aggressively performed as if they were auditioning for the now cancelled MTV’s America’s Best Dance Crew.  Their hip hop styled dance with numerous back flips and other acrobatic tricks did little to excite the audience nor did it do anything to visually announce that you were watching a performance by one of Caribbean’s best live performers.  Instead this opening number just seemed odd in our Trinbagonian setting as these boys quickly forgot their role was to be the backup dancers and not the stars of the show.  In the end you were left longing for the girls who were Machel’s back up dancers from C2K14 who all had a greater ease to their performances.

The tone had now been set the onslaught of firsts as Machel’s band, which recently had more member changes than Menudo during the 80s, continued to sound disjointed and unrehearsed.  This lead to the next first, a public apology from Machel himself while he was still on stage. 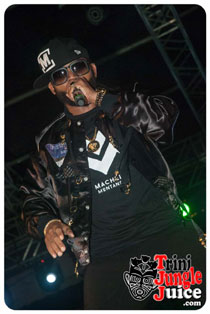 Machel apologised for how the band sounded and then tried to quickly win back the unmoved crowd as he tried to engage them with announcements of other firsts.  He announced that he would now, for the first time in his career, not be managed by his mother Elizabeth Montano as she has gone into a much deserved retirement.  The crowd, which had just been reference by Machel as having a chat with a brick wall, remained stone faced as Machel quickly moved into the next number.

But the most ironic first was when all the stage lights lost electrical supply during the entire performance by Machel’s long-time friend Farmer Nappy.  With no stage lights the atmosphere was set Farmer’s to perform by candle... um I mean cell phone light.  But he quickly proved that he can perform under any circumstance as he moved the crowd brick by brick and built his “House.”

In the end, the well oiled machine that is Fantasy the Carnival Band did everything that they had under their control to perfection as entry was a breeze, food and drinks bars were easily accessible and the stage layout made viewing easy from all vantage points.  But it was what happened on the stage made the crowd feel a bit cheated.  Let’s hope this Machel-Bunji Collaboration Jumbie unleashed after Sunset Festival in December 2014 does not continue to follow the M.O.N.K. to ruin other performances.