Bacchanal Jamaica is "Untamed" for 2015 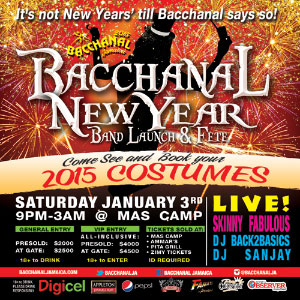 “Untamed” is the theme for Bacchanal 2015 which will kick off at the Mas Camp on Saturday January 3 with a mix of outstanding Caribbean entertainers – Vincentian soca artiste Skinny Fabulous, Back2Basics from Trinidad via New York, and Jamaica’s Sanjay – who will give revelers a taste of what they can expect between February 20 and April 12 when the party climaxes with the road march in Kingston.

Bacchanal director, Charmaine Franklin, shared her excitement about the lineup of activities planned for the next few months. “We are very pleased that this New Year’s party is now one of the major events of the season attracting not only traditional revelers but a large band of new party goers eager to experience the fun of the carnival experience. It is the platform from which we introduce our costumes and this year we have a range of creative and exciting designs including frontline and backline costumes and four new outside sections from LehwegoSleek, Unleashed, Summer Jarrett and Peeny Wallie Mas. There will also be T shirts and leisure wear for the more conservative. We urge all who want to play mas to come out the party to ensure that they get the costumes of their choice”

DIGICEL will be back on board as the headline sponsor and other traditional sponsors Pepsi, Smirnoff, Fame, Pure Country, Appleton and Jamaica Observer will continue to partner with Bacchanal Jamaica in providing a quality option for relaxation and entertainment for Jamaicans at home and abroad.

Among the many artistes who will be leading the charge at Bacchanal Fridays are soca favourites Destra and her Bakanal Band, Bunji Garlin, Fayann Lyons and the Viking Band, Kes the band, Kerwin Debois, 5 Star Akil, Lyrical, and Farmer Nappy. DJs from the Caribbean will include Pvt Ryan, Duchess, De Bandit and top local Djs Smoke, Richie RAS, Richie D, and Bambino. The ever popular Socacise is back on the calendar of activities as are Beach Jouvert and Bacchanal Jouvert.

“Carnival is now firmly entrenched in the local entertainment scene and in typical Jamaican style we have given it our own flavour to make it a truly Jamaican experience. We at Bacchanal Jamaica are proud of the contribution we have made over the past 15 years to provide another important channel for creativity and cultural expression,” said Michael Ammar, Bacchanal Jamaica director.