Fete with The Saints 2015 to be held at the picturesque St. Mary's College Grounds 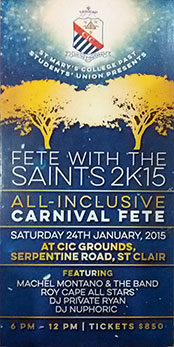 Widely acclaimed as the best ‘school fete’ held in 2014, Fete with The Saints, the annual All-Inclusive carnival fete hosted by the St. Mary’s College Past Students’ Union has a new venue. The fund-raising event which will be held on Saturday, January 24th, has been shifted to the picturesque St. Mary’s College Grounds at Serpentine Road, St. Clair.

The Organising Committee took Fete With The Saints 2014 to a new high in 2014 in terms of music, food, decor and ambience, all of which brought untold pleasure to the throngs of people who attended the event. For 2015, the committee is planning to further improve the event and give their patrons an unforgettably epicurean experience while raising funds for the benefit of the College and its students. The committee, led by the energetic Roberto Ramirez, has been hard at work over the past eight months preparing for the event, all to ensure the comfort and enjoyment of their patrons.

Non-stop music will be provided by Machel Montano and the band; Roy Cape All Stars featuring ‘the ladies man’, Ricardo ‘Vagabond’ Drue and the versatile Blaxx, plus two top soca DJs, Nuphoric and Private Ryan. Guest artistes will be added to the musical line-up nearer to the date of the event. As is customary, steel-band music will bring proceedings to an end, allowing patrons to go for a ‘chip’ on the road.

The ‘fete’ area will be ringed by gaily decorated tents that will house the numerous food stations, bars and other attractions, including a make-up booth for the ladies. The committee has engaged the services of Ultimate Events Limited in the persons of CIC alumni, Dean Ackin and Gerard Ramirez, leaders of large mas’ bands Tribe and Bliss, to advise on the layout of the venue. Responsibility for decorating the venue has also been assigned to Ultimate Events Limited, given their vast experience in decorating events of their own.

The menu at Fete With The Saints 2014 definitely appealed to the palates of those in attendance and quite amazingly, patrons are being promised that the range and quality of meals and hors d’oeuvres will be increased. Some of the outstanding dishes at last year’s fete were served at the Grill Station where patrons feasted on beef kebabs, chicken kebabs and lamb racks. Tasty pork ribs went down quite well with patrons. All of these items will again be available this year but added to the menu will be a delectable seafood serving and an assortment of soups.

As usual, premium drinks will be served, plus a variety of cocktails and non-alcoholic beverages. A highlight this year will be a special Champagne Bar and a Yellow Tail Bar with Yellow Tail Bubbles sparkling wine as the main attraction. The dessert section will cater to those who do not have to be unduly concerned about their calorie intake as well as to those who are very health conscious. Haagen Dazs ice-cream has always been served at Fete With The Saints and the cinnamon cup-cakes and rolls that were a hit with patrons last year will be there once more. A tangy taste will come in the form of a variety of chows made from various fruits and those wanting a great blend of coffee at the fete can sip on a cup of the exotic Juan Valdez coffee produced in Colombia.

Admission fee to this premium All-Inclusive Champagne event is $850 and as usual, full profits will be given to St. Mary’s College to assist in meeting operational and capital expenses. The Past Students’ Union is now one of the significant sources of income for the College, having financed within the past decade, projects such as the air-conditioning of the Centenary Hall, the establishment of a computer laboratory and a foreign languages laboratory and also development programmes for teachers.

Tickets are available at the Past Students’ Union Office (telephone # 624-8468); South Trinidad from Felix Montenegro (684-5839); East Trinidad from Gregg Mannette (668-7555); Enrico Rajah at Trini Revellers Mas Camp (745-4391); Central Trinidad from Louis Ramdhanie (371-9193) and from all members of the Management Committee of the Past Students’ Union, including John Allum, Joe Hadad, Brevard Nelson, John Hadeed, Matthew Leach, Rudy Balwant and Nestor Lambert. Tickets can also be purchased online at urbanisle.com

Patrons can safely park their vehicles at the following locations:  Queen’s Royal College (QRC) – entrance on Hayes Street; Queen’s Park Oval – entrance on Elizabeth Street; and the car-park facility of the Nelson Mandela Tennis Courts of the Port of Spain City Corporation, at the corner of Hayes Street and Elizabeth Street. A free shuttle service is available to take patrons from the car-parks and back, but the driver must present an admission ticket to gain access to the car-park.