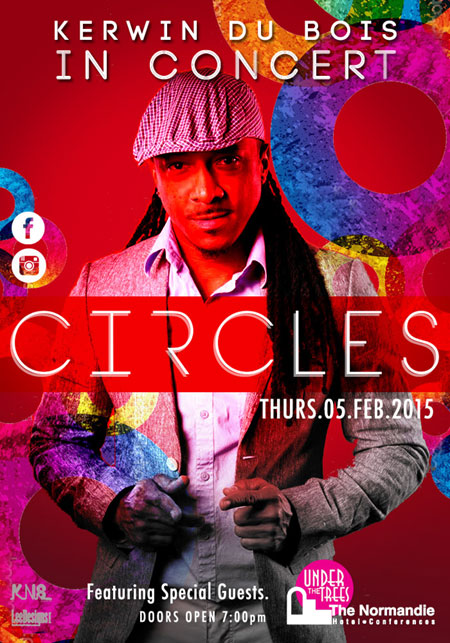 Trinidad, WI: On Thursday 05th February 2015 the Normandie Hotel will facilitate an intimate concert titled "Circles." Reigning Groovy Soca Monarch Kerwin Du Bois has finally answered the calls of many supporters by deciding to share his musical talents in the form of a concert.

Du Bois promises to accompany all those present on a musical journey showcasing his works throughout his career. As a performer and entertainer Kerwin began his career at the young age of 13 eventually working his way through Young Kings and a number of Calypso competitions. His love for music allowed him to further dabble in songwriting and producing eventually becoming a household name.

With his focus being solely on "Contributing great music for the masses to enjoy", Kerwin Du Bois is on a mission to continue to fly the Soca flag worldwide. On the night of February 05th, patrons can expect a number of guest performers who have been musical friends and collaborators with Du Bois over the years.

For tickets visit http://www.o2ticket.com/event/kerwinduboisinconcert and at Normandie Hotel