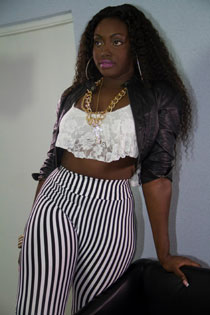 Her brother David Brooks, popularly known as Mavado is one of the biggest stars in Dancehall music and Joey Brooks is determined to follow in his huge footsteps.

The 28 year old singer made her first appearance on the music scene back in 2008 with a soulful love ballad titled Heart Beat, which was produced by Ariff Butler and released on the Bloozic imprint.

In the ensuing years she recorded a handful of singles that enjoyed strong rotation on local radio stations.

“After I released my first single I recorded several other songs that were well received. Songs such as Emotions, Faraway and Waiting for You ft. Flexx got a lot of airplay”

In 2013 Joey decided to put music on hold to pursue another lifelong dream. She went back to school to study nursing.

“Since I was a little girl I always wanted to be a nurse, but I also loved singing too. I guess you could say that music and nursing are two of my greatest passions. When I decided to back to school and study nursing a lot people were shocked, but I just had to do it. Now that I am a certified nurse, I’m ready to pursue my music career full time again and I am confident that if I ever decided to quit music I have something else to fall back on,” said the artist.

Signed to Live MB Music Productions under the management of Michael Barracks, Brooks is confident that it won’t be long before she becomes a household name in the music industry.

“I’m very happy to be back in the music business. I’m signed with Live MB Music and my manager and everyone at the company has a lot faith in me, they really believe in my talent. With their support I’m confident that I will be able to make my mark in the music business very soon. I plan to release a lot of songs this year and I will also be doing a lot of shows. I’m going all the way to the top with my career now, no holding back,” she said.

Joey Brooks is currently promoting a hot new single called Your Love, on the Vision, rhythm which was produced by Live MB Music.