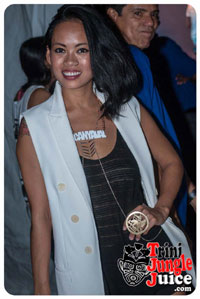 Fete with the Saints (FWTS) was the best fete for the weekend.  This weekend, is what I like to call, my carnival warm up.  No matter how much soca music you stream for the last few months, in preparation, nothing can compare to actually setting foot on Trini soil and combining what you think is a big tune, with what the masses really feeling in the fetes.  Like Lyrikal say, ah living for tonight...  FWTS is fete number two for the weekend, so by now I have a good sense of what the big crowd favorites are.  Like a Boss gone clear from early!

Apart from the 2 mile walk to the media entrance :-), entry was quick and easy.  The one unknown for Saints fete this year, was the impact the new venue would have on the event.  As of last year's event, FWTS  had outgrown its original venue at the school's campus on Frederick street.  This year, things were relocated to the school recreational field, aka 'Dong Grounds'.

Just when you thought it would be hard to beat the abidance and service from last year, they smack you with a bigger and better event.  I'm talking ambiance, energy, top notch cuisine with variety galore and service to match!  I'm talking Glenfiddich in the regular bar type top notch.  I could go through the list of food stations, but we would be here for a while.  Special shout out to those ribs though, made me want to genuflect, and slap somebody.  To transform an open field into a feter's Oasis  like that, easily put FWTS into the realm of world class productions. 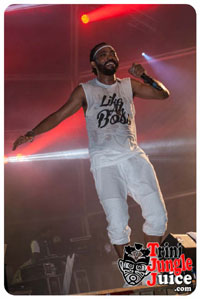 Roy Cape took the stage early, and as am sure I mentioned in last year's run down, this band is still one of the most consistent and tight bands in the game.  Blaxx and Ricardo Drue (Mr. Vagabond) had the crowd going, from start to finish, with a long entertaining set.  DJ Private Ryan took the set right after and did what Ryan does.  Next up was Benjai with his ever growing discography of monster hits like this year's 'Phenomenal'.  It was a full set of nothing but hits, from Benjai.  On the heels of Benjai came another hit machine, Kerwin Du Bois.  Kerwin gave a good performance but seemed to want to lean on his mega hits form 2014 instead of his 2015 repertoire, that is quite potent as well.  If he were to ask my advice, which I'm pretty sure he doesn't need :-), I would say you the man bro!  Show the audience who is in charge, take command.

Speaking of taking command, LOOK TROUBLE NOW!  10:30 was the time that Machel HD aka Monk Monte, transformed the place from a event into a show.  What more can I say, zero to sixty in 3 seconds.  Everybody from the older generation down to current students turn professional :-).  The place was in a frenzy for the entire set.  No better way to end what was already a spectacular production.  Last year's helicopter returned at the end of the set, shining the spotlight on the fete, prompting feters to carry on that much more for the grand finale.

As far as room for improvement goes, I would say, don't let natural coconut water run out.  Having to drink coconut water from a box in Trinidad is sacrilegious.  Other than that, keep doing what you doing!

Heads up to those flying in for carnival, data plans do not work in any fete.  Don't say I didn't warn you :-).  Four fetes this weekend (don't try this at home), and they were all good, but FWTS, was GREAT!!!  Hands down the best fete for the weekend and definitely one not to be missed #LikeABoss.

Wade aka The Party Appraiser