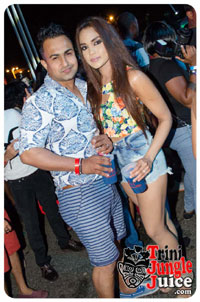 We heading South!  Straight from Piarco International, we hit the highway and we're heading to Out in South.  Always a thrill to hit a fete for the first time, can't wait to see what all the hype is about :-).  This one was held in the car park of the National Academy for the performing arts South campus.  Parking was easy, we're right next to Skinner Park.  No issues at the backstage entrance, we on the inside, let the appraisal begin.  Full marks for transforming a car park into a venue, world class audio visual and props, especially for a cooler fete.  The venue was split into two main areas, VIP (ice and chaser included) and general.  VIP guests we free to move back and forth.  I would say the only difference was a little more elbow room in VIP, than in general.  Fete was RAM! 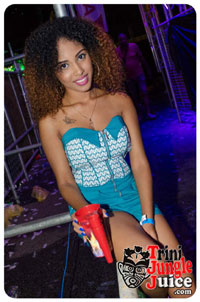 The action was fast and furious all night long.  Private Ryan warmed up the venue nicely,  then it was stage show time, Sekon Sta, Skinny Fabulous, Ricardo Drew and Shal all in Rapid fire, no pause between performances.  I was really feeling that.  Hypa Hoppa, Zan and Shal even get some forward with that 'song' :-).  Lyrikal came on with my anthem for carnival, Cloud 9, followed by the grizzly veteran,  Crazy.  Asward took over the music duties with the infamous Lurbz on the mic.  Like a boss and Party done were the order of the night.  Rome and Preedy made a brief appearance, before Olatunji proceeded to mash down the place with his smash hit Ola!

Around 2:45, it was Kerwin Du Bois turn to keep the energy in the fete high.  They say South people have real vibes, I can confirm that.  There was a little bit of a lull after Kerwin's performance, especially with Lord Hype getting stuck in his 2014 crate :-).  However, that all changed when the Viking (Bunji) stormed the stage!  Still the best freestyler in business, Bunji Garlin had the place back up to full tilt in no time, and kept them there, until coolers were empty.

If you have not been to Out in South, I highly recommend adding this one to your carnival calendar.  Value for money galore, and it's a cooler fete!  Room for improvement,  the porta potty needed some deodorant  :-).  One common theme for all carnival fetes so far, is the inability of local phone companies to provide data service in a fete. No fault of the AIR Committee.

Thanks for having the TJJ crew, and we will see you in OUT 2016.

Wade aka the Party Appraiser