By Sidney aka Scorn Juice
Published on 13-Feb-15
Bayview Cooler Fete is the naughtiest party you will attend for the entire Trinidad Carnival Season. For three (3) years straight, we at the TJJ headquarters have attended this event and from since 2013, we have made this a staple on our calendars; a “must do” event! #DoNotMissThisParty 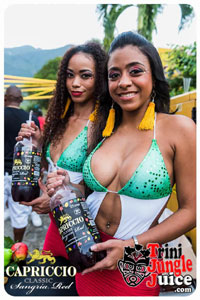 Bayview Cooler Fete is the naughtiest party you will attend for the entire Trinidad Carnival Season. For three (3) years straight, we at the TJJ headquarters have attended this event and from since 2013, we have made this a staple on our calendars; a “must do” event! #DoNotMissThisParty

We say cheers to the people in this party! Foreigners & Locals ... all at the same time in pure jubilation were present. Regardless of age, creed or race, we are all one in this party celebrating and contributing to the excitement in this party. What we have noticed in the three years attending is the crowd is almost 80% to 90% the same people. When we see new people from previous years not attending the current year it is because either they are foreigners who did not travel to Trinidad or they are local people who were new main squeezes in one year but no longer the main squeeze in the present year. Whatever the reason is, everything in the cooler, everything in the box, and we love it! Another admirable and welcomed pillar of this party is you can bet your last fifty (50) dollar note that crews who were in a spot / location in one year will be in that SAME spot in the current year. I guess the saying comes to mind, “Do Not Trouble, Trouble, Unless Trouble, Troubles You!”

Maracas Bay look out is definitely a star gazing icon of a party venue. You will find it very difficult to forget where you are, when all you have to do is look out at the serene view. 2015 saw a change with the entrance to the event being swapped and previous year’s entrance was elevated. Awesome idea! One of the unique elements of this party is the uneven ground that patrons dance on, and with this elevation although flat, it did not take away from the uneven element but instead added “something new”. Work it, Work it Cocoa Crew! 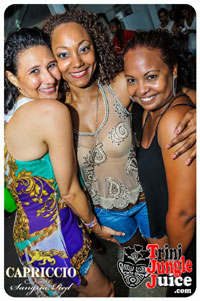 The DJ Cast at Bayview never seems to disappoint the masses with their exquisite timing of playing the plethora of soca hits to ensure everyone showed their 'Phenomenal' behaviour. Complete 'Naughty' attitudes were present maybe because it was a 'Cooler Fete'. I want to say 'Cheers' to the DJs for that skill because I am sure if this did not happen they would have been 'In Trouble'. Patrons were 'Going Off' most of the evening and if you were not dancing with someone you were certainly 'Looking For It'. You may even be asking yourself “where all these energetic people 'Come From'?” Maybe it was the 'Remedy' you needed for the evening however if you could not handle what was being offered you definitely 'Look Fuh Dat'. I cannot tell you how many 'Circles' of people I saw 'Getting On Bad' after all, it was time to 'Raze'. I am pretty sure I did not want to miss this, if I was in 'My House', I would have been crying because I would have missed the flight to 'Cloud 9'. I am 100% confident that 'No Apology' would be given to you by patrons for their behaviour because they were with their friends and I am sure one or two of them 'Popped A Bottle' because it is that energy and vibe at Bayview. For those who missed it, don’t worry, everyone who was there enjoyed themselves through the night until the 'Party Done'.

The true nature of Bayview Cooler Fete, the cooler fete theme that has been explored for the last five plus years, excellent, flawless manner, can’t, won’t and impossible to explain in this review. This party isn’t just some regular cooler party for the calendar entries of Trinidad Carnival, and there is far more to it than just dancing, drinking and socializing. Certainly, some of its many elements could confound to the point of complete weariness, however if one has been preparing and controlling their levels of fitness there would be no problems. Two words come to mind:- "Faultless Precision" ... you had  to be there to experience it!