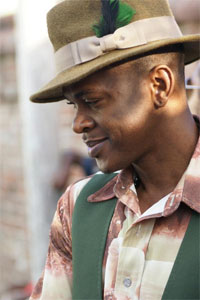 NEW YORK, NY (RHONA FOX, INC.) - Dancehall star Mr. Vegas is set to take New York City by storm on Friday, January 30, 2009. He will be bringing his moves and grooves to New York promoting powerhouse - Upscale Crowd and Caribbean Fuse's Caribbean Fridays at Club Element in lower Manhattan, with his signature tunes that will leave you "Heads High," and make you "Tek Weh Yuh Self" and do the "Hot Wuk."

Mr. Vegas is coming off an amazing year where he has toured the world, from Africa to Japan, and island-hopped across the Caribbean, as he celebrated the release of his most recent album, HOT IT UP (Delicious Vinyl, 2007).

Scoring several number ones on the dancehall charts in Jamaica, he's also currently causing a splash by making Vibe Magazine's "80 Best Songs of '08," with his hit tune that created a dance craze, "Tek Weh Yuh Self." He is only one of two Caribbean artists making the coveted list, alongside Mavado.

Vegas' universal appeal is obvious as his tunes become anthems in the dancehall, both at home and internationally, and he has achieved and maintained a unique level of crossover success for over a decade now. Now his new hits, "Mus Come A Road" and "Deh Pon De Scene" (Beauty Riddim, TJ Records) are shaking airwaves around the globe and give his fans yet another reason to "hot wuk."

So take a break from the cold and come enjoy the Vegas heat this Friday at Element, starting at 11pm. Advance tickets are now available for $15 online at www.upscalecrowd.com, and $20 at the door, before 12:30am. Log on to www.upscalecrowd.com for further ticket information, or contact the promoters at upscaleinfo@gmail.com.