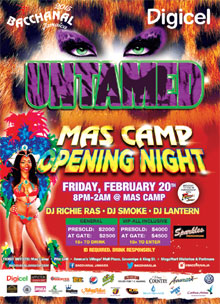 Soca lovers and revellers its Bacchanal time again! The Mas Camp opens its doors on Friday 20 February, as Trinidad Carnival passes the baton to Jamaica to carry on the carnival celebrations. The official opening of Bacchanal Fridays signals the beginning of the weekly fetes which will take revellers right up to the series conclusion March 27, which is then followed by the popular fetes Beach J'ouvert, Bacchanal J'ouvert and the annual Road Parade on April 5, 10 and 12.

Three of Kingston's hottest disc jockeys, Smoke, Richie RAS and Lantern will roll out all the latest soca music as they work to get the local carnival lovers in tune for the Bacchanal Jamaica season.
The Mas Camp will certainly be the place of choice every Friday night over the next six weeks as Bacchanal Fridays create the vibes for dancing and unwinding at the end of a long work week. The atmosphere is one of fun, camaraderie and excitement as the Bacchanal Jamaica team, backed up by sponsors, provide the top quality entertainment, fun activities, food and drink to ensure the most pleasurable experience for patrons.

Long-standing sponsors of Bacchanal Jamaica – Digicel, Smirnoff, Pure Country, Appleton, FAME FM Jamaica Observer, Caribbean Airlines, TVJ, RE TV, Pepsi, Ting, Securicor, King Alarm and the Jamaica Tourist Board – and new sponsors ATL and Select Brands will be showcasing their brands so patrons can look forward to a variety of activities as each seeks to engage revellers in innovative ways.

“The opening of Bacchanal Fridays is always eagerly anticipated by the thousands of soca and carnival lovers in Jamaica. The reputation of Bacchanal Jamaica has grown amazingly over the years and we are now attracting people from all over the globe. The Saucy Diva, who writes the Trini Carnival Diary, rated Bacchanal Jamaica 2014 as one of her best carnival moments outside of Trinidad. We considered this high praise and intend to make 2015 even better”, said Bacchanal Director Michael Ammar.

Mr Ammar also noted that the costumes will be on display for those who have not yet made their choice but warned that “time is running out as costume sales are very robust”. He reminded that for the more modest revellers, T-shirts and shorts are available. These will also be on display at the opening night.