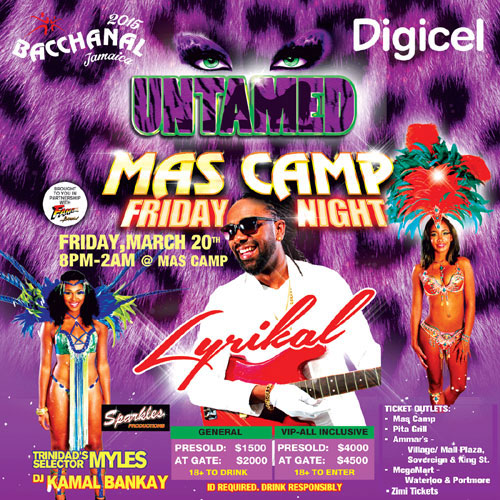 The excitement at Bacchanal Fridays continues to rise as the journey to the big weekend winds down. DJs Richie Ras and Toronto-based D’Bandit heated up the Mas Camp crowd with favourites such as “Lucy” by Destra, and “Raze” by Fayann Lyon and “Like ah Boss” by Machel.
By the time Akil “5 Star” Borneo came on the stage the revellers were ready to welcome him for his first appearance as the main act on the Mas Camp stage. Akil, with the superb support of DJ Cornell,kept the vibe high leading with his hit song “Partier” into an eclectic set that featured his songs “Untamed”, “Noise” and “Island Adventure”, selections of old school soca anthems such as “Dollar Wine”, dancehall and hip hop. “I prepare very carefully for my performances,” shared Akil, “and I make sure to find out what the crowd wants. I know my markets. For example, I know that Jamaicans love the old school soca hits so we mixed that in with other popular genres to keep the revellers happy. The experience was great for me and I believe it was great for them!”
Akil loves the Jamaican vibe which he feels is second only to Trinidad and Tobago. Jamaica, he noted, was the inspiration for his songs “Island Adventure” and “Noise”.

The versatile Lyrikal will be coming to Bacchanal next Friday. The Trinidadian soca artiste, based in Brooklyn, New York, has earned himself an enviable reputation and is in demand to perform across the Caribbean and North America. Lyrikal has built an extensive catalogue, his repertoire consists of hit singles, such as “Wuk-Out Yuh Man”, “Nothing Under”, “All Over De Gyal”, “Ramajay”, “Conquer Meh” and his 2015 hit "Cloud 9" and many more including countless collaborations with leading artistes and producers.

Charmaine Franklin, Bacchanal Jamaica director, said that with the climax of the series on the horizon, it was important to keep the excitement high. “We will be featuring a performer for each of the Bacchanal Friday fetes and of course we bring in Bunji and Fayann and the Viking Band, Kes The Band, and Destra with Bakanal Band and Kerwin  for the final fetes –Digicel (March 27), Beach Jouvert (April 4), Bacchanal Jouvert (April 10) and the Road March (April 12). The Bacchanal audience has been very pleased with our choices so far. We have an eye for talent and we knew that Akil, although new to Jamaicans, would be able to “bring it” to the Mas Camp stage. We look forward to Lyrikal’s performance next week and encourage soca lovers to come out and be a part of the fun”.

Bacchanal Jamaica sponsor Smirnoff, in the spirit of celebrating life responsibly, decided to reward revellers at Bacchanal Fridays with a chance for themselves and up to five friends to be transported to and from Mas Camp as a part of the company’s Drink Right Campaign. To qualify revellers had to pledge to drink right #ipledgetodrinkright on Facebook, Instagram or Twitter. “Getting home safely is an important part of responsible partying, so we decided to provide the designated driver for some of the Bacchanal revellers. This week’s winners were Orinthia Bailey, Jodi Ann Sewell and Stacy Ann Gordon. We encourage anyone planning to go to Bacchanal Fridays to pledge to “drink right” and they might just become one of our lucky winners, said Nanda Dukharan, Brand PR Manager, Red Stripe.