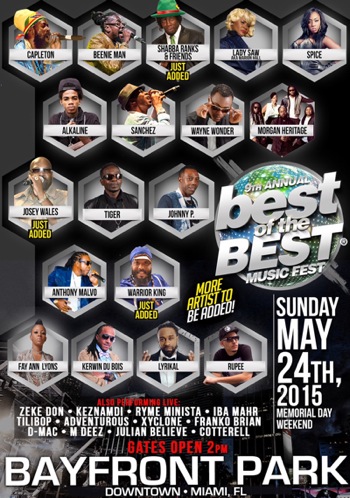 (Miami, FL - April 8, 2015) South Florida's longest running Memorial Weekend concert, Best Of The Best, returns to Bayfront Park (301 Biscayne Blvd.) on Sunday, May 24th. Produced by Best Of The Best Entertainment, in association with Rockers Island Entertainment and Massive B, the 100% Caribbean show, celebrating it's 9th year, will once again feature a smorgasbord of Reggae, Dancehall and Soca giants all up in the mix.

Not to be outdone, the star studded Soca lineup already includes Fay Ann Lyons, Kerwin Du Bois, Lyrikal and Rupee. More artists will be added to the entire bill in the coming weeks. General Admission tickets for Best Of The Best 2015 are currently on sale for $49 and VIP/OPEN BAR tickets are on sale for $139. Both early bird deals available until May 1st.