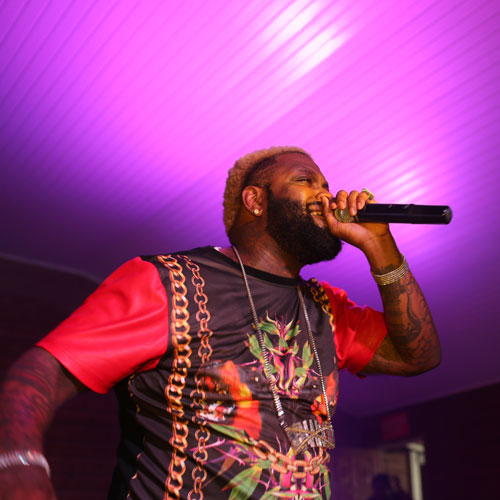 PRISM MARKETING CONSULTANTS || APRIL 27, 2015 || International recording artiste Demarco presently preparing for a triple concert stint this weekend in Haiti, New York and Guyana has yet another career milestone to celebrate amidst his hectic tour schedule.

Though unable to attend due to other professional engagement the 'Bun Up Road' singer was the recipient of the 'Lifetime Achievement Award' at the 5th staging of the annual Music Industry Achievers Awards (MIA) held at the Courtleigh Auditorium, New Kingston last Friday. The singer was also nominated for 'Male Artiste of the Year' and 'Song Of The Year' with 'Good Book'.

Known for being instrumental in some of the biggest music projects locally Demarco says he is very pleased that an organization such as the MIA sees it fitting to recognize him for him body of work throughout the years.

Unknown to many Demarco has worked with a plethora of international superstars such as Busta Rhymes, French Montana, Machel Montano, Eve, 3six Mafia, Olivia (formerly of G-Unit). M.O.P., Timbaland, Missy Elliot and Shaggy among others. He has toured extensively across the globe accumulating a surfeit of accolades namely: The first Dancehall act to grace the cover of ‘Infuzion’, an Arabian magazine; Nominated for 2014 Afro Song of the Year in Australia for ‘Summer Time’ with Ghanaian star Samini;  First Dancehall act to perform in Ethiopia, Nominated for ‘Best Reggae Act’ in Europe’s 2013 & 2014 Urban Music Award; Performed for Ugandan dignitaries; Given the Key to the City of Belize; Performed for the Haitian Government, Uganda and Israel annexed to appearances at almost all the major Reggae and Dancehall festivals across the globe.

The multifarious entertainer is also known for concocting  some of the most successful projects in the Dancehall sphere over the last decade namely: Mission Rhythm, Shoot Out Rhythm, Side Walk University Rhythm, Gang War Rhythm, March Out Rhythm, Warning Rhythm and Pon Di Edge among others. His most recent hits includes: Lazy Body, Continue Whine, Love Yuh Wah Love, Ride, 'Bun Up Road', 'Puppy Tail' and the heavy hitting street anthem ‘Good Book’.