By Idea Ventures
Published on 09-May-15
WEST ORANGE, NJ (April 10, 2015) – A recently launchedboard game, Trini Dus Say, seeks to infect homes with excitement, fun and laughter in a word game that highlights historical figures, foods, landmarks and phrasesthat are known to Trinidad and Tobagoculture. 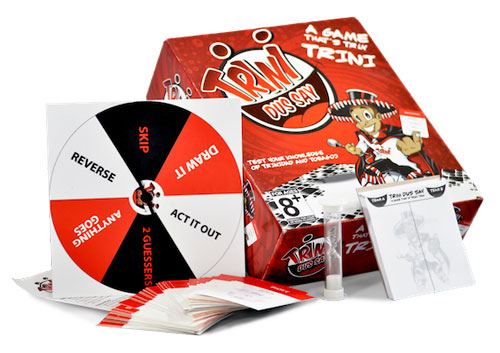 In October 2012,Trini Dus Say’s creators, Kieran and Jahlisa, were trapped by the Hurricane Sandy in New Jerseyfor two weeks. While confined by the storm’s massive power, they played a friendly game of Taboo. Inspired by the game’s challenges, Kieran, a native of Trinidad,came up with countless items, people and places that were unique to Trinidad and Tobago, referred to as T&Tby some. Jahlisa collaborated with him and formed a fast paced gameplay, creating a cultural game that family and friends can enjoy.

The objective of the game is to show off your knowledge of T&Tand guess as many Trini-related words as possible before time runs out. “By the end of this game, you will definitely know who’s a True Trini,” said Jahlisa.

Kieran and Jahlisa doesn’t want to restrict the game toT&T, they want to share their fun to those abroad, challenging their knowledge of Trinidad and Tobago. The innovative duo has made Trini Dus Say available for purchase on their website.