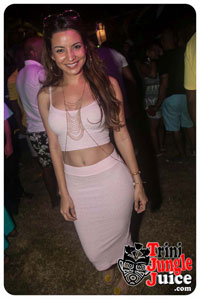 “Gyal and dem, dem ah rush me,
What De hell is that?!
When yuh see me in de place! Yeah!
Party done! DONE!”

And the party almost done before it even started as some patrons decided not to follow instructions to park in the secured Blanchisseuse High School but instead parked indiscriminately along the stretch of road leading up to beach house MAYFAIR resulting in utmost difficulty for the shuttles to navigate the narrow winding road.  But the die-hard beach house Fans knew that other than this initial hiccup they would have a guaranteed grand time at anything called Beach House!

Beach House MAYFAIR, the Cooler Edition was back where it all began 12 years ago at the same Beach House in Blanchisseuse, Trinidad.  Similar to beach house MAYFAIR held in 2010 (see gallery) the May Fair theme was evident from the moment you approached the venue as were greeted by the signature oversized large “Beach House” letters.  While at the gate the pleasantries continued with free Hennessy shots and cotton candy!

This daytime event had its the usual layout of food and drink bars for those who decided not to walk with a cooler, while the DJs were elevated above the crowd via scaffolding with the rest of the beach house grounds punctuated with 15 foot colourful flags everywhere. 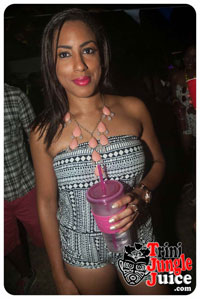 The Beach House’s manicured grounds with its colourful foliage played the perfect host to the near capacity crowd with its endless supply of beautiful ladies dressed in Cool Caribbean Chic Couture.  However the high fashion designs worn did little to suppress audio ecstasy felt and displayed by these ladies as the DJ continued to play.

As the sun began to set the party atmosphere continued to build into a crescendo as DJ Artiste Team mounted the DJ Throne as they smashed every genre of music from every era!  This continued way past the designated 8pm finish time leaving everyone satisfied with their mid-year beach house fix.

In the end beach house MAYFAIR continues to be a thrill, but this time you were left with a sour taste in your mouth as shuttles were unable to come back to the event due to the now impassable road, leaving patron to now walk miles in the dark to designated parking lot.