By Idea Ventures
Published on 04-Aug-15
Trinidad, WI: Still on a high from his 2015 Groovy Soca Monarch win, Olatunji ‘Ola’ Yearwood continues to enjoy opportunities that he considers to be “Blessings.” The talented entertainer has been touring consistently since his win and performing for sold out crowds throughout the ... 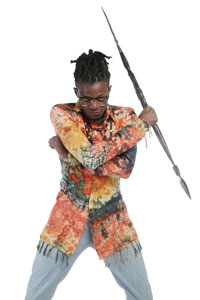 Trinidad, WI: Still on a high from his 2015 Groovy Soca Monarch win, Olatunji ‘Ola’ Yearwood continues to enjoy opportunities that he considers to be “Blessings.” The talented entertainer has been touring consistently since his win and performing for sold out crowds throughout the Caribbean, USA, Canada and London. On November 25th, Ola would be added to the list of the few Soca artistes that can boast of sharing Soca music live in Dubai, an opportunity that he is quite excited about. “ZATTI! I am ready and willing to accept the duties that come along with being a cultural ambassador” said Ola. He continues to embrace the constant changes which impact his music such as his recent EDM remix of “Ola” with 5z1 Productions who he will join on his trip to the United Arab Emirates (UAE).

The excitement that Ola experiences while on stage or in studio is incomparable to that of the birth of the existence of his two daughters, one of which was born on July 29th 2015. Dhakiya Yearwood (pronounced Da-Keya) reminded Ola yet again of the importance of his role as a father. He is embracing fatherhood and all that it offers and admits that “It’s no easy task but it is rewarding once you do it well and the right way.” His statement not only speaks to fatherhood but to his music. By mid-September his album ‘AWAKENING’ will be released and will represent what he considers well crafted, written and produced music that represents him.

Ola is already testing his fans with the recent release of his track ‘Herbalistic’; a club banging track that incorporates EDM, Trap, Hip Hop, Reggae and Soca. His simple explanation of a Herbalistic is “A Herbalistic is someone or a group of individuals that uses nature as an escape from depression, recession, segregation, stress and all the negatives of life.” It may be an unanticipated track from him but just as nature and music, anything can be expected from Olatunji. (Listen to the track here) The standard has been set, expect the unexpected from Olatunji as he shares his blessings with the world.