Port of Spain, August 7, 2015: Minister of Sport the Honorable Brent Sancho has met with members of the Trinidad and Tobago Chess Association (TTCA) including several national Champions who will be participating in the Central American and Caribbean (CAC) Youth Chess Festival which takes place from August 13thto 19th at the Cascadia Hotel in St. Anns. 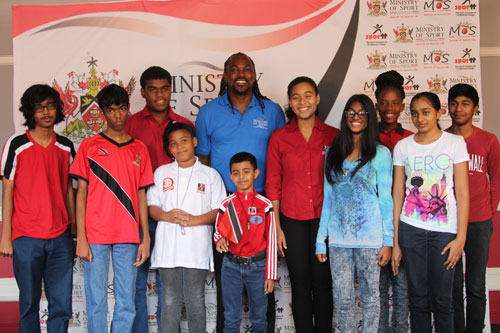 Minister Sancho thanked the Trinidad and Tobago Chess association for bringing the tournament to Port of Spain,congratulated the young Champions for their achievements thus far and exhorted them to do the country proud next week. “Representing your country is always a privilege and an honor,”he said, “it is not just about winning but also, about how you carry yourself and interact. Once you put on national colors you are abrand ambassador for the 1.6 million people of this country”.

TTCA 1st Vice President Sonja Johnson spoke about Trinidad and Tobago’s rich history of participation in the tournament, saluting several Trinbagonians who had won their categories outright in recent years including Shemilah James- Under 10 Female (2012), Della Marie Walcott-Under 10 Female (2011), Joshua Johnson, Under 10 Absolute (2009), Ronnie Nelson Under 8 male (2007), Keron Cabralis Under 12 male (2006) and Joseph Gill Under 14 male (2006). She expressed gratitude for the level of support offered by the Ministry of Sport, and other sponsors including: First Citizens Asset Management Limited, Rhand Credit Union, Blue Waters, Seven Seas and Scrip J before making an appeal for, “more sponsors to come on board.”

This will be the first time that the inter-regional tournament,open to junior participants from Central America and the Caribbean, Colombia and Venezuela will be held in the English Speaking Caribbean. Categories include: Under 8, 10, 12, 14, 16 & 18 as well as an absolute (Open) and Female. Registration has not yet closed and already over 140 foreign competitors from 14 countries are confirmed. Any national under the age of 18 can and is encouraged to register and participate. Additional details on the tournament can be found at chesstt.org. Alternatively, persons can contact any member of the organizing committee: Sonja Johnson 681 1151, Debra Walcott, 499 7965, Sandy Razark 683 4439.