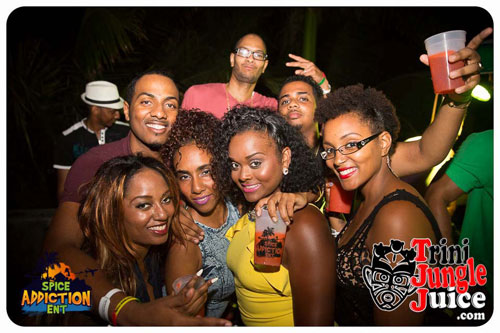 BEINVENUE, that's French... literally meaning "Welcome". What a fitting name for the first event of Spice Addiction Ent. three event Grenada Carnival weekend. As the influx of people made their way onto this tiny Caribbean isle called GRENADA for Spicemas 2015 this was the event to be at to welcome you to Grenada.

CROWD - 8
The crowd was a late crowd, and as I found out over the weekend my Grenadian people move under the cover of night. Hmmm. I wonder why? Except for folks in the country. I was told "...we different in country, we like solar. We only operate when the sun's up!" #shrug. But yea, the event started during the day but the mass of feters didn't come out until the sun went down. Nonetheless the crowd was trendy, fashionable, all GREAT looking individuals.

VENUE - 9
This venue was BEAUTIFUL. It was at a Great house up in the mountains of Morne Jaloux, thats french lol.. meaning Jealous Mountain and there were great reason for the jealousy. This great house (soon to be a monastery retreat) had panoramic views of the island. Simply beautiful especially with all the decorations. The priest and nuns that will be occupying the residence would have no idea what happened here and thats how we like it. Amen.

VIBE - 8
The vibes built steadily into the night until the mass of people were present... then it sky rocketed. The DJs had us rocking to sounds from around the world with a great amount of Grenadian soca, which was loved by everyone "...there's a jab on Sesame Street" lol the rain even came down and you knew it wasnt a stoosh crowd as everyone was partying in the rain. I go hear bout them and cold in the morning. lol

FOOD - 9
The food was located on the opposite side of the venue, and I wasnt sure if everyone knew that. Once you located the food and navigated yourself thrut he dimly lit area the food was delicious.

All in all, this was a great successful launch, first event. To the partiers who live on the island to the ones flying in, I'm pretty sure 90% of the party goers it was their first time at this venue and Spice Addiction Ent. did a great job.