City On The Hill Makes Caribbean Debut At TTFF 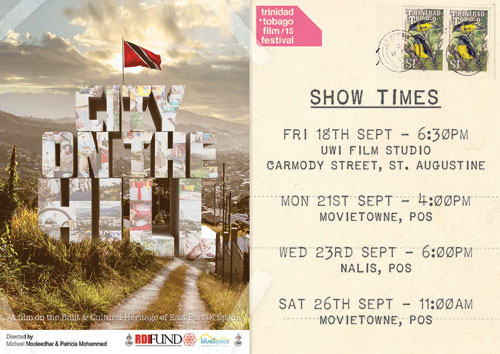 Port of Spain, August 29th 2015 – Fresh from successful showings in Los Angeles and New Orleans, as well as a special viewing at the WITCO Desperadoes old pan yard in Laventille and Citizens for Conservation at So-Zi Island in St Clair, Port of Spain, City on the Hill, a film highlighting the dynamic cultural heritage of the city of Laventille, will now be screened for Caribbean audiences at the 2015 Trinidad and Tobago Film Festival (TTFF).

Helmed by Professor Patricia Mohammed and Michael Mooleedhar, the award-winning team behind the experiential documentary Coolie Pink and Green and feature film Seventeen Colours and a Sitar, City on the Hill takes audiences on a rare journey into the lives of the descendents of the builders of Port of Spain, men and women whose enduring vigour is manifested through their spirituality and extraordinary ingenuity.

The film captured the attention of audiences abroad with its vibrant presentation of a city, despite being beleaguered by criminal elements, brimming with creativity and vitality.  Viewers at the Live Astro arts space in Los Angeles and the Caribbean Studies Association annual conference at the Hilton Hotel Riverside, New Orleans were struck by the compelling narrative, which was punctuated by Wendell Manwarren of 3 Canal’s poignant rendition of the poetry and prose of Trinidadian cultural luminaries Earl Lovelace, and Wayne Brown, as well as Nobel Laureate Derek Walcott.

Patricia and Joy, the Quamina sisters, are Orisha Priestesses in Laventille

“I never saw Laventille in this kind of light before,” said a young migrant from Trinidad who had been living in Los Angeles for several years.  “Now I feel when I come back home, I want to experience this place again”.

Trinbagonian viewers, many of whom have never set foot on the hill, were struck by the access  which the filmmakers had to respondents on camera as well as the diversity of religious experience which emerges,  among them Orisha, Rada, Catholicism and Hinduism.  The lyrical blending of history, geography, built and cultural heritage through poetry and prose - elements which have defined Laventille – moved many viewers to imagine the space in a new light.

It is the hope of the filmmakers that City on the Hill will spur audiences to imagine Laventille in a richer context. Indeed, the film connects to a larger initiative, as it was commissioned by the project “Leveraging Built and Cultural Heritage of East Port of Spain”, led by Dr Asad Mohammed and Perry Polar, and funded by the Research and Development Impact Fund, The University of the West Indies, St. Augustine.

According to Mohammed, “With this film and project, I was committed to casting another light on this city that has been primarily viewed from negative angles to encourage policy makers and planners to see its aesthetic and economic potential in the future.”

For Mooleedhar, City on the Hill presents a medium for the spirit of Laventille to triumph on screen. “The exceptionally rich built and cultural heritage of Laventille is still alive,” he remarked. “By putting a lens on the triumphs of this city, we can hopefully harness this creativity in a meaningful way that will benefit the people of Laventille and positively impact the rest of Trinidad and Tobago”. 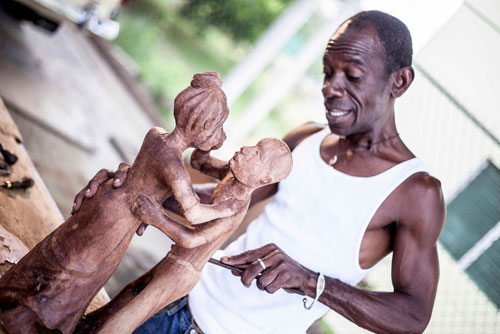 City on the Hill, as part of the project “Leveraging Built and Cultural Heritage of East Port of Spain”, records the process by which a spatially mapped Geographic Information System (GIS) model for urban development is being developed. It draws on the researched inventories of oral and cultural history to present social and economic resources that may be leveraged for further creativity and growth of this city on the hill.

For further information on the film, please visit http://www.ttfilmfestival.com/film-synopsis/city-on-the-hill/.