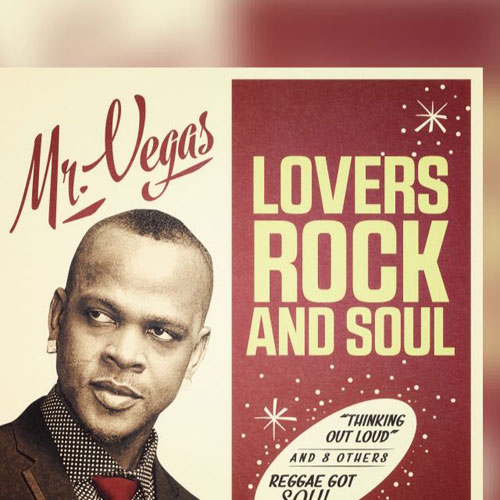 International recording star Mr. Vegas is in a jubilant mood as he prepares for the release of his upcoming album aptly titled Lovers Rock & Soul. The eleven track album features an eclectic mix of R&B, Pop & Reggae covers.

Lovers Rock & Soul is a winner from start to finish; it opens with Vegas' cover of Ed Sheeran's Thinking Out Loud.

The versatile entertainer shows off his vocal dexterity and execution throughout the entire album.

He serves up a soul-stirring performance on There's Nothing Better Than Love, which was originally done by legendary R&B crooner Luther Vandross and actor Gregory Hines.

Vegas and his protégé Natel also delivers a beautiful interpretation of the Jon B, and Baby Face’s classic R&B hit, Someone To Love.

The versatile Dancehall entertainer stamps his class on every track on the album. His vocal brilliance shines especially on songs such as Love Is All Around by We Wet Wet and Time After Time by Cindy Lauper.

“This is my seventh official album and I wanted it to be special. That’s why I chose to sing these songs they are all classics and personal favorites of mine. I also want this album to stand the test of time and be remembered as one of the great albums in the modern era of Reggae,” said Vegas.

"These musicians did a fantastic job, they bring out the real old school Reggae flavor on this project.”