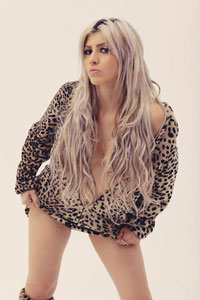 Trinidad, WI: Sultry Colombian Songstress Neniita Barco is creating quite a stir in Trinidad and Tobago. Over the last four weeks the crowd stopping beauty has been making her rounds in Trinidad and Tobago, leaving her Latin flavor everywhere she goes as she promotes her collaboration 'Colita' with budding Soca artiste Mr. Renzo.

Translating in English as tail, 'Colita' encourages sexy waist and hip movements by women. The single which is a combination of Dembow (a genre from the Dominican Republic) and Soca is geared towards the Hispanic markets and Latin music lovers.

Neniita’s love for Soca music was almost instantaneous during her first visit to Trinidad and Tobago to learn English. As she continued to indulge in Trinbago’s culture, her understanding of the genre and her desire to be involved continued to grow. After some eight years of socializing and networking in the twin island republic her desire to merge and market both cultures was born. The recently signed artiste to Mr Renzo Music Limited now has the opportunity to do just that.

Fluent both in English and Spanish, Neniita has the opportunity to dominate throughout Latin market worldwide. With a recently released video to accompany her recent collaboration with Mr. Renzo, she has been visiting numerous media houses to promote herself and her music to the pleasure of many.

Her plan as she shares is “To introduce the Latin communities worldwide to Soca music.” She knows it’s no easy task but is confident in her partnership with Mr. Renzo having danced for him earlier in his career and co-managed his Colombian tour in 2014. As she continues to focus on her musical career as a writer and singer Neniita has he eyes set on greatness.