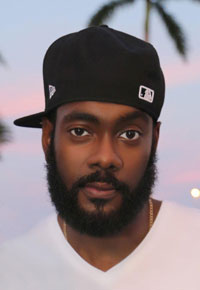 Amidst the onslaught of Groovy Soca songs being released for T&T’s Carnival 2016, Trinidadad-born, South Carolina-based Soca artiste Ronnel Ramirez known to his industry peers as Champeon has brought forward one of the first up-tempo offerings for the season with his new track “Bringin It”.

‘Bringin It’ is a different sound for Champeon who previously released songs such as ‘Red Devil’ and ‘2nite’. The inspiration for this departure was to strategically create a different sort of song that would be more marketable within the industry. According to him ‘Bringin It’ is an upbeat track created to make Soca fans not only dance but party hard. He shared, “I’m bringing the power, the energy and the perseverance to keep delivering music, so I am Bringin it”.

The song was produced by Shawn ‘Da Mastamind’ Noel and written by fellow Soca artiste Kuttit and shows off Champeon’s development in the Soca realm, a growth which has been noticeable by both his fans and entertainment industry colleagues.

The determined Champeon has made major strides in 2015 and has shared stages with several prominent Caribbean entertainers such as Soca Queen Alison Hinds, Reggae star Everton Blender as well as Carnival favorites Lyrikal, Giselle the Wassi One and Yankey Boy.

Despite still working on establishing his presence in the T&T Soca scene, Champeon performs regularly in the southern U.S.A. Caribbean music circuit and has helped to spread the Soca/Caribbean culture to the southern part of the US especially North and South Carolina.

Champeon has been a Soca ambassador throughout those stated at major events which include Charlotte’s Jerk Festival and the Carolina’s Caribbean Culture Festival and plans to expand his brand to other cities such as Raleigh, Greenville, Fayetteville and Greensboro.

Champeon who doesn’t consider himself a crooner but rather describes his vocal delivery as hard-hitting and unique, sees his new track ‘Bringin It’ as the first step in his rebranding. He is applying his 2015 lessons for an improved 2016. He has also been studying the business models of successful artistes in various genres such as Rap mogul Rick Ross and Soca heavyweight Machel Montano who have utilized teamwork, marketing and strategy to elevate their brands.

Even with his ambitions to become a household name in Soca, Champeon remains humble, patient and consistent in all his efforts to improve his craft and achieve his success.