Machel and Roy to Fete With The Saints on Jan.16 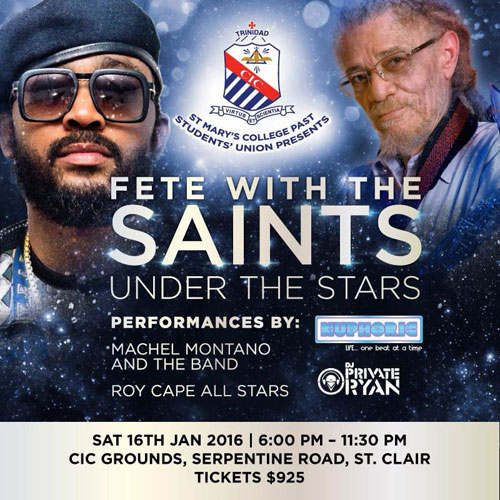 St. Mary's College Past Students'  Union  has been hard at work with plans for Fete With The Saints (FWTS) 2016 which comes off on Saturday, January 16.  The 2015 edition of the fete was held at the College's Sports Ground at Serpentine Road, St. Clair for the first time after being hosted at the College's compound at Frederick Street, Port of Spain for eleven years. The change in venue was well received by patrons as it lent itself to a more pleasing ambience and spacious accommodation.

For next year's edition, the Committee members, led by the indefatigable Roberto Ramirez, are aware that they are expected to meet, if not surpass, the high standards they set at FWTS 2015. Accordingly, they are leaving no stone unturned to please attendees, whether it be in terms of music, ambience, food, drink or any other element of the fete.

In the arena of music, soca superstar Machel Montano and his band will again be at FWTS for what might possibly be his first performance in Trinidad for the upcoming Carnival season. Machel gave his adoring fans an unforgettable performance at FWTS 2015 and he has promised that in 2016 he will be again at the top of his game.

Roy Cape All Stars also contributed in a big way to the musical excellence that had patrons dancing all night long at FWTS 2015. Ricardo (Vagabond) Drue and Blaxx, the lead singers of the Roy Cape aggregation had a wonderful season last Carnival and word on the street is that they will be just as strong for 2016. The 'All-Inclusive' cognoscenti have given their stamp of approval to the musical line-up that the Saints are presenting for FWTS 2016, given that highly sought-after international DJs, Nuphoric and Private Ryan, will be complementing Machel and Roy Cape.

Patrons who attended FWTS 2015 marvelled at how the naturally picturesque CIC Sports Ground was further enhanced into a venue that was aesthetically pleasing to the senses and most conducive to feteing. That enhancement was brought about by Ultimate Events Limited (UEL), an outfit led by Dean Ackin of Tribe fame. So positive was the feedback about the decor that the Organising Committee did not have to think twice about entrusting the assignment to UEL once again.

In terms of infrastructure, a large dome stage will be in place for the artistes, along with top of the line lighting and sound systems. The layout of the venue will be such that it will allow for easy access to food, drink and  executive-type toilets. Details for food and drink are almost finalized  but what is certain is that some exciting gourmet meals will be prepared on spot by Khalid Mohammed's Chaud Restaurant of Nook Ave., St. Ann's.