Maxi Priest to depart ahead of Carnival Celebrations 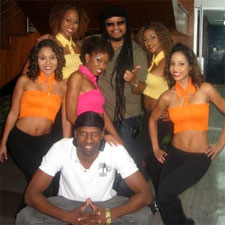 Maxi Priest, the guest of reigning Groovy Soca Monarch title-holder, Shurwayne Winchester, who has been in Trinidad throughout the season, will make his final appearance at the Battle Of The Sexes tomorrow night.

Word from the SW camp is that Maxi is destined to head back to the UK on Friday morning, mere hours before Winchester takes the stage to perform in 9th position in the competition of which he is the defending champion and then in first position in the Power Monarch segment of the show.

Up to the time of this release, Maxi Priest and Shurwayne were said to have been rehearsing for Thursday’s performance, which is expected to be a stellar one, ahead of the Jamaican crooner’s departure. Shurwayne Winchester has had a phenomenal season, this after having formed the band YOU, a transition that many thought would not have been easily made. Throughout the season, both he and Maxi have appeared on the stages of some of the most exclusive events, one of those being the COTT awards which was held back in November.

Fans of Maxi Priest can look forward to visits in the near future as he has expressed his love for Trinidad, soca music and even suggested the possibility of more soca- reggae collaborations.