Belizeans are Ready for Beenie! 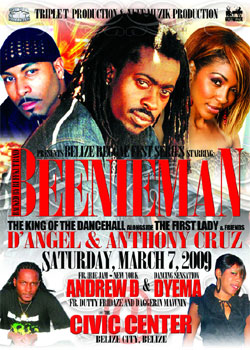 "The response has been amazing," states Triple T Productions CEO Tasz Smith. "I have been in Belize for a little over a week now, and everyone is buzzing about the show. Ticket sales are going extremely well. Belizeans have always been great supporters of Caribbean entertainment, unfortunately the access to top level entertainers is limited. I am really glad that we [Triple T and Nuffmuzik] decided to launch the Belize Reggae Fest Series and bring the best of the Caribbean to Belize."

Beenie Man, who will be in Belize for the first time in nearly four years, is equally excited about launching the series.

"The people of Belize are in for a great show," states Beenie Man. "Belize always shows Beenie Man love, and Beenie Man loves Belize. It's been a long time, so you done know I have to give them something extra extra special."

"This is a special guest appearance that you won't want to miss, so make sure you come out," states D'Angel before adding her signature "An Suh!"

"It's going to be crazy," states Anthony Cruz. "Fans from Belize have been sending a lot of love through my website and my Myspace page. I am looking forward to touching down in Belize."