Fete With The Saints 2016 Review

Fetealotathon 2016 has begun. We're back for our annual warm up weekend.  This is the weekend that we actually touch T&T soil to sample the vibes, live and direct, before we return for the main event a few weeks later.  Event number two on our weekend calendar is Fete With The Saints!  This would be the second FWTS since the event was relocated from the actual school compound, to the school's recreational facility 'Dong Grounds', as we say :-).  Last year we gave this fete a stellar review, and all the after carnival buzz mentioned it as one of the best fetes for carnival, if not the best.  We're eager to see if this could be sustained. 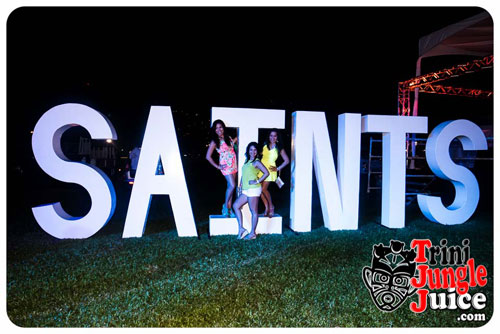 I mentioned last year, that they took a wide open space and transformed it into not just a world class atmosphere, but an experience.  Well, they nailed it again and even improved on it.  With all the talk of a recession, it certainly was not evident by the massive crowd at FWTS this year.  The catering was immaculate and diverse, as we have come to expect from any top notch all inclusive fete, but most especially this one.  I can safely say that nothing was missing.  Yes, I saw horse again, you on your own with that one :-).  I won't spend all day listing out the smorgasbord, but here is just a sample: roasted lamb and pork , fajitas, geera everything, oxtail soup, Chinese, souse, paella, saltfish and provision, fruits, chow, curry everything, doubles and chicken rings.  The chicken rings went laterally all night, even after the music stopped! 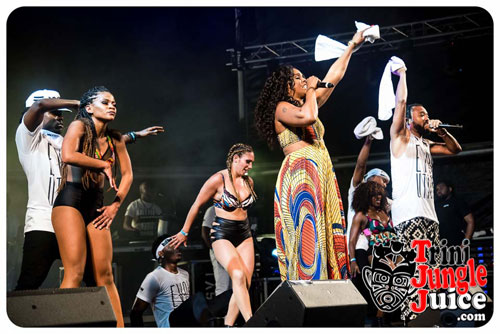 Speaking of music, Roy Cape All Stars kicked off the live performances just after 6 p.m, Blaxx, Ricardo Drue, and Darnella, each with massive hits of their own, headlined the band.  Lyrikal did his thing as well, and DJs Nuphoric and Private Ryan held it down between the two bands.  Nuphoric had the crowd eating out of the palm of their hands.  Monk Monte took the stage around 10.15p.m and took the fete to fifth gear.  Angela Hunte and Skinny Fabulous joined him on stage to perform their 2015 and 2016 hits.  Personally, I have some reservations about an "EDM Road March" but clearly the rest of Trinidad has fully signed on :-).  MM's road march contender "Waiting on the Stage" had both young and old, in a frenzy.  As always, the Monk did not disappoint, delivering a set that lasted well over an hour and a half.  This deserves special mention, as Machel has been limiting his appearances this carnival, and not only did he show the Saints love, he went over and beyond.

I can safely put to rest, the chatter (more so form the foreign based crew) that the music this year is somehow lacking.  While 2015 was indeed an exceptional year, I think 2016 it is yet another banner year for soca music!  The 2015 Groovy Soca Monarch, Olatunji Yearwood, closed the show with a hit-riddled solo set, and great ending to yet another extremely well executed Fete With The Saints.