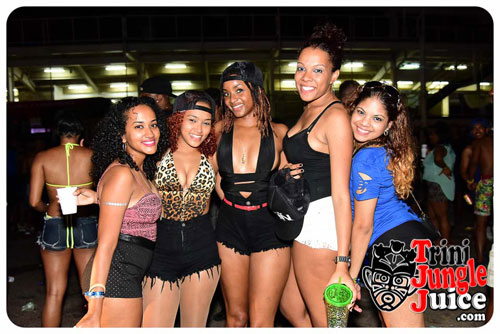 It was billed as the THE ALTERNATIVE to Pan Semis (well definitely The Greens), however with the level of bacchanal here, we think that Pan Semis will now be the warm up for Bacchanal Road from 2017.

Jeez, they may need to start pan earlier.... we arrived at 5pm... not as early as my friends in the Neon crew who were quite sun burnt by this, so the party was already swinging, and the bar truck was already pumping. However, I felt like a ghost at times as the bartenders just refused to see me... I guess they were only taking repeat orders. Anyhow, after my first swing of truth serum, I started pointing my camera at random events, and I could not believe my viewfinder. I had to double check my display to ensure those photos were what I really saw... and still after post editing I discovered some interesting artifacts in the shots lol (including the sock winer gyal, and the rest you will see for yourself)... and oooh a Forres Park girl giving sips directly from the bottle. If I only new I would have saved the bar time and probably have an extra 100 shots (photos that is, but you are thinking like a Bacchanalist, I like that!).

So the elitists will probably not approve of this transmission, but who cares, I love my Pan, but I also love my Bacchanal... can't we have our cake and eat it in 2017??!! Oh and then the Monk dancers arrived and started vibes behind de truck, and silly me was not aware they were preparing for a video shoot with the Monk himself... but the warm up session was priceless. I bet they wished they filmed that. Then double M took his stage (where else? on de big truck) and gave a stage-worthy performance.

Oh, I forgot to mention the stage! Pretty ingenious actually, the mini stage they created added flames to the bacchanal fire; I was really hoping the stage was above and beyond OSHA standards by at least 200% because it was pure fire, and as usual people did not want to get off. I started the stage shots on the floor, and some photographers came up to me saying, "Boy that is not a good place to be yuh know". Obviously they were not aware they are talking to Drama Juice of TJJ (and one with Kaleidodash experience).

My advice to future Bacchanalists... get your doubles and soup during the party and not after please. Let's score. 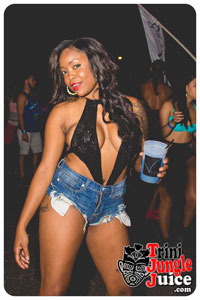 VIBE - 10
One word: Bacchanal. DJ Private Ryan, Lurbz & Ultra Simmo among others. In comes Machel Montano with a big performance of his 2016 Road March contender "Waiting on the Stage" video shoot.

Food and Drink - 7
Drinks truck was loaded with premium drinks. But, it was just not enough. Beers were hot... no Johnnie. Doubles man was really top, and excellent server but needed more for the size of the event. Bar ran out of ice (and the sno-cone man was too far from the bar). As a Bacchanlist, we're just keeing it real and telling it like it is.... gave Food and Drinks a 7 because we know you had good intentions, but was itching to put a lower score.

SERVICE - 8
Service was on point. However, long wait time for drinks. Suggestion... maybe a self service station for non-mixed drinks like water, beer and soft drinks?

Cost
For a Drinks Inclusive event, we think the price was good.