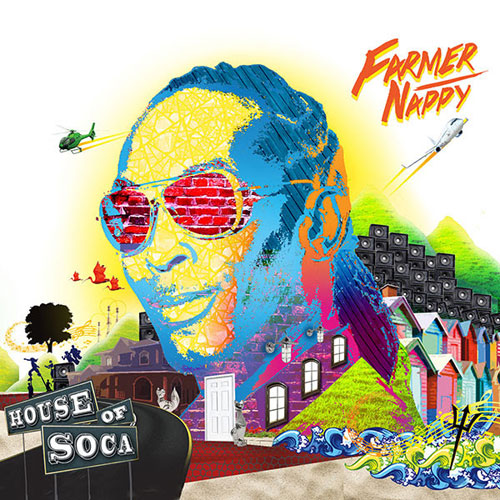 New York, NY – Internationally-acclaimed, Trinidad and Tobago-born and based entertainer Darryl “Farmer Nappy” Henry celebrates over 30 years in soca music and his rich legacy manifests with his new masterpiece album, House Of Soca, now available worldwide from all major digital retailers (released on January 29, 2016), from FOX FUSE. Born and raised in the town of Siparia in southern Trinidad, Farmer Nappy is the definitive soca performer, presenting provocative lyrical styles and soulful vocal flows that span all spectrums of the genre, from calypso to groovy and everything in between.

Farmer celebrates the 2016 Trinidad Carnival season in style, with two internationally-acclaimed albums under his belt and a kaleidoscope of new anthems for the masses on House Of Soca. He placed first runner-up in the 2015 International Groovy Soca Monarch Competition with his groovy crowd favorite “My House,” and will be competing in the 2016 International Soca Monarch finals on Fantastic Friday (February 5, 2016) with his new monster hit “Bambilambambilambilambam,” both of which highlight this new collection of classics.

“I’m very grateful to have my team to help me build my house – the producers, musicians, songwriters and everyone who worked on this album, and also all the fans who support my music,” says Farmer Nappy. “From children to grandparents, my music is for everyone to enjoy so welcome to my house of soca.”

“We’re thrilled to deliver another electrifying album from Farmer Nappy to the global audience,” state Zack Cohen and Rhona Fox, owners of the New York-based music label FOX FUSE. “This is our third album in five years from Farmer Nappy, and it is fulfilling to bring more world-class productions from such an exciting and consistent artist.”

Having spent most of his career playing an integral role in fellow soca star Machel Montano’s HD Band, Farmer Nappy also embarks on a new journey as he steps out as an international solo artist with his personal backing band, De Red Boyz Band (a collaboration with De Red Boyz), and stands in his own, hard-earned and much-deserved spotlight. His accomplishments continue to earn him respect from the industry and fans alike, and cement him as the voice of the groovy soca genre.

For more information on Farmer Nappy, visit farmernappy.com and follow his daily moves at Facebook.com/FarmerNappy, Twitter.com/1FarmerNappy and Instagram.com/FarmerNappy. Please direct all press inquiries to the FOX FUSE Publicity Department at 1-212-300-3813 or contact@foxfuse.com.